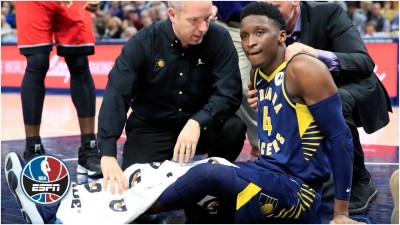 Victor Oladipo remembers this moment and his rehab well enough to not want to repeat it.

Victor Oladipo has a serious decision to make.

I’m a big fan of employees showing up for work and for teammates doing whatever is needed to answer the bell as a unit, but if Oladipo decides he is done with basketball until tipoff of the 2020-2021 season he gets a pass.

Thirteen games into a comeback after surgery to repair a torn quadriceps, Oladipo is pondering the wisdom of returning to play for eight regular season games in Orlando which will put a bow on this weird season interrupted.

Sitting would cost Oladipo just over two-million dollars, plus whatever he might make in the playoffs.  About his return, he told ESPN’s Adrian Wojnarowski, “I know there’s risk going into it with the unique situation that I’m in – being off so long and trying to ramp it up that fast. I’ve just got to be smart, that’s all.”

Oladipo is not a fool, and only a fool would ignore the financial component of this choice.  Next year will be the last on his current contract paying him $21-million per year.  Taking a chance on the recurrence of an injury during a weird return in a Coronavirus mandated bubble less than one year from the most impactful financial moment of his life is enough to give pause for reflection.

Healthy, Oladipo could command a massive contract.  If he suffers a setback, the penalty could be more than $100-million.

Two-million bucks is a lot of money to you, me, Oladipo, and Pacers owner Herb Simon, but $100-million is that times 50.  I’m no math genius, but if someone offered me the choice between two and 100, I take the 100!

Everyone wants to be a great teammate, but no one on the Pacers would begrudge Oladipo a business decision given the circumstance.  Washington Wizards Davis Bertans has opted out with the full support of his employers, and Portland forward Trevor Ariza will also sit in order to take advantage of a month long visitation window with his 12-year-old son.

There will be others who choose to avoid the rest of the season, so Oladipo won’t be an outlier whatever he decides.

When basketball resumes July 30th, the Pacers will be tied with the Philadelphia 76ers for fifth in the Eastern Conference, two games ahead of fourth place Miami.  No fans will be in the stands, the games will be weird, and the playoffs will produce an strange champion.  The Pacers are not expected to contend, although who knows given the quirky circumstances.

Sensible people can question the wisdom of playing while a flareup of Coronavirus occurs in Florida and racial protests are in full flower during a moment in history when the tide may finally turn against racism.  Some players will embrace the moment to play, and others will balk in favor of safety, family, and rallies.  If Oladipo is among them, that’s cool by me.

The last three months have been odd, to say the least,  Decisions are being made based upon a totally unique set of factors and considerations.  That some might feel compelled to not view throwing a leather ball through an orange hoop as critically important right now might just reflect well upon them.

Life is different.  Basketball will be different.  That makes our decision to judge whether a player is right or wrong to play of sit much more difficult – so difficult that it’s probably wise for us to pass instead of shoot.