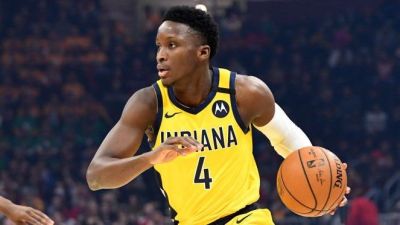 Whether Victor Oladipo plays for the Pacers has at least as much to do with $3 million as the health of his knee.

We got a little insight into the decision-making process of Victor Oladipo during yesterday’s Pacers media availability from Orlando.

Last week, Oladipo shared on social media his decision to forego playing when the season resumes on August 1st.  I understood that as a protective measure as he heads into the last season of his four-year, $84 million contract.  From a financial standpoint, the 2020-2021 season will be the most important of his career.

Then it was reported that the NBA and players union were arguing about whether Oladipo was eligible to be paid by the Pacers as a healthy scratch.  The money in question is in the neighborhood of $3 million.

At the time, I understood Oladipo’s decision as a present day sacrifice toward future wealth.  With more than $100 million at stake, it was (and is) in Oladipo’s best interest for focus all energy toward a healthy next season instead of participating in this bizarre re-launch in Orlando.

Then Oladipo got to Orlando, practiced well, and was reported to be reconsidering his availability.  That has led to a debate as to whether he is motivated by greed or the need to compete.  It is such a good question, ESPN’s Rachel Nichols asked him this yesterday,  “Have you resolved with the league whether you’ll get paid if you don’t play – and how is all that going to factor in your decision making?”

“No, I haven’t talked to them.  I don’t know.  That’s out of my control.  I don’t have any control of that.  Honestly, I don’t even know the amount or what goes into it.  I’m just focused on my knee.  I’m not really concerned about anything I can’t control.  It’s out of my control.  Other people handle that, I guess, whatever the case is.  But I just want to play basketball – plain and simple.  I want to make sure my knee is at its best ability, and I’m at my best ability when I go out there and to perform at a high level.  So that’s really what I’m focused on, Rachel, so I can’t really answer that question.  I’m sorry but I’m sure I could probably could figure it out, and I’ll make sure and let you guys know.”

Prior to listening to Oladipo’s answer, I was fairly certain he was giving serious thought to playing because he felt great in practice.  I took Oladipo at his word, until I listened to his words several times. Now, I’m convinced the $3 million is the only thing Oladipo covets because people telling the truth just don’t talk like that.

This was a rambling mishmash of words strung together without any coherent message, and that is what people fall back on when they don’t want to be transparent or overtly dishonest.  Oladipo obfuscated, and that makes it easy to assume he didn’t want to share the truth.

One thing Oladipo really wants people to know is that the situation is out of his control.  He uses that phrase four times in the first 53 words of his answer.  He is accurate in that the NBA and NBPA will determine whether he is eligible to be paid as a healthy scratch, but whether he plays and knowing how much money he will be due are entirely under his control.

I would have more respect for Oladipo if he sticks to his guns, passes on the $3 million (or donates it to a worthy charity, if he gets paid as a healthy scratch), and cheers from the bench as his teammates compete.

I’ve always given Oladipo the benefit of the doubt as he’s rambled to the media because I’ve liked him since he started working out in Bloomington as an incoming freshman, but given the answer to Nichols’ question it’s impossible to believe his potential return is about anything but $3 million.