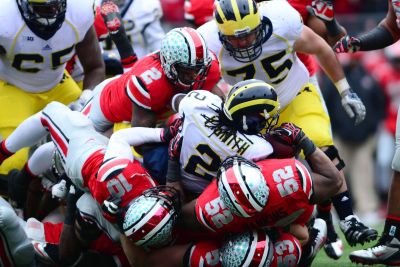 I’m not an epidemiologist, but I’m certain this is not social distancing!

What will college and professional football players be willing to sacrifice in order to play this fall?  That’s the question that will determine whether their seasons are lost or found.

College players are going to have to do the impossible – stay sequestered away from the general population of their universities for four months.  It sounds easy, but think back to how restless you were as a student.  Can you remember a weekend where you completely avoided parties or bars?  Can you imagine 100 college athletes each keeping a promise that they will not consort with girls or socialize outside the athletic community?

Remember that unlike the professionals, college players are not employees.  There is a level of authority coaches can utilize to compel players to behave, but without a hammer to enforce compliance, how can they keep football players away from the social fun of a campus?

With each school determining its own safety protocols, what are the chances they will be able to  keep outbreaks from erupting?  If the chances appear slim and the future bleak, I can’t fault you for your pessimism.

I hate thinking that way, and I struggle to avoid looking at the mortality rates of healthy people age 18-22 and judging Covid-19 mostly harmless among the demographic playing college football.  I am not an epidemiologist, and judging the health concerns posed by any virus is beyond my pay grade, especially when doctors are having trouble understanding this scourge.  But I do know that “Rub some dirt on it,” does not work on viruses.

As for the NFL guys, they need to stay home.  No clubs, parties, travel, or silliness of any kind – despite the fun provided by limitless resources and fame-driven access.  And for those players, coaches, executives, and trainers who are married with children, they are going to have to hope their families do everything possible to avoid contact with Covid-19 or all is lost.

The difference between how Major League Baseball and the NBA has relaunched their seasons is instructive in trying to project the behavior that could lead football to a clean start and finish. Baseball players are all over the place violating the protocols established for player safety.  Conversely, because of trust between the NBA and NBPA, there is a respect for the bubble in Orlando that appears to be working.

If college and pro football want to begin and end the upcoming season on schedule, they are going to have to be a whole lot more like the NBA and not at all like baseball.  That’s going to be a tough hill to climb because of the sheer numbers.  There are three times as many football players in the Big 10 as basketball players in the NBA.  The NFL has four times the number of NBA players.  And perhaps most damning, baseball is built for social distancing.  Football is a hugging, sweating, collision-filled mess.

In the end, the decision to play college football will be whether to risk the health of football players in order to salvage the economic health of athletic departments and communities.  With the NFL, it’s a little more complicated because everyone loses financially if they don’t play.

These are insanely complicated and contentious times without a clear answer in any direction in society and the sports that reflect it.  Play and several may fall ill with the choice of a few dying, but the economics that benefit so many are save.  Keep players off the field, and they still might contract Covid-19, and the financial health of the NFL, university athletic departments, and college towns craters.