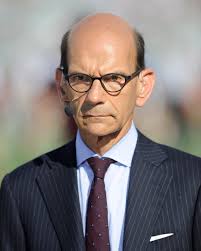 I wish the grim reaper of college football would shut the hell up and leave analysis of COVID-19 risk to the experts.

ESPN’s Paul Finebaum was the second grader who ran around the classroom screaming, “There’s no such thing as Santa Claus!” on the last day before Christmas break.  He’s also the guy who calls to tell you he heard your job is being eliminated.  Then as you are ready to start the final season of “Breaking Bad,” Finebaum casually mentions Walter White dies in the last episode while Jesse gets away.

He wants to be right, even if it means ruining your day.  Finebaum is a professional killjoy who is training the intellect with which he is so impressed on whether there will be a college football season.

Like you, I watch, listen to, and read sports experts talk about games, teams, leagues, leadership, and the will to compete.  People on ESPN, The Athletic, sports talk radio stations, and other sports media venues understand that stuff – or at least they are accomplished at pretending to.  About viral spreads, they are clueless, but that doesn’t keep many from weighing in.

When pundits venture outside their sweet spot of sports, my ears glaze over and my ears throb.  That’s especially true when predictions are dire.  Finebaum is one of the worst violators as he continually chastises conferences and the NCAA for even contemplating the possibility college football will be played in 2020.

Finebaum declares during every opportunity on ESPN that the motivator for playing college football is “Money, money, money!”  He chastises administrators for their greed while failing to acknowledge the revenue generated by college football pays for a hell of a lot of what goes on at many universities, including scholarships for athletes in non-revenue sports.  Just because money is a priority to athletic departments and conferences does not mean greed is the driver.

The Athletic’s Bob Kravitz has been a perpetrator of a little sports media doom and gloom as well.  Kravitz’s latest piece laments the uncertainty of the upcoming football season, while denying absurd allegations sports media roots for cancellations.  I love Bob, but whether football will be played is a decision beyond his pay grade based upon information beyond his ability (and mine) to fully understand.

Both Finebaum and Kravitz might be correct in their skepticism.  Maybe football can’t be played without mini-outbreaks of COVID-19 popping up everywhere.  Who knows?  Programs all over the country are trying to manage voluntary workouts without causing chaos, and that’s without students on campus, travel to away games, and full contact.

Bubbles are holding in the NBA, NHL, and MLS while baseball’s season is in crisis because of outbreaks within the St. Louis Cardinals and Miami Marlins organizations.  Bubbles seem to be a necessity for safe competition, but that evidence is anecdotal.  Who am I to make that declaration?  Who is Finebaum to argue medical facts – or even cite them?

I’m tired of people who don’t know more than I do about COVID-19 projecting their negativity into my living room and smart phone.  It’s hard enough to keep smiling through this tumult without being force fed reasons to frown during programming and on websites I rely upon as an escape from relentlessly bad or confusing insight about this virus while we await vaccines.

I’m not asking sports media types to be falsely rosy in their assessment of risk in continuing to work toward a football season, but is it too much to ask they stay in their lanes a little bit while allowing experts to give us what they believe is the actual news about COVID-19?

If NFL and college football seasons are canceled or postponed because spread is difficult to control as contact sports are played outside a bubble, so be it.  Let’s deal with that if that becomes a reality.  Jumping to a poorly informed grim conclusion about the upcoming season does no one any good.

There is no nobility in being correct about something so miserable, despite Finebaum’s obvious craving for that moment.