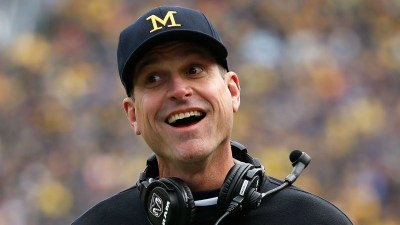 Jim Harbaugh might be straight up crazy, but he sure makes college football more fun. He was at it again yesterday.

I love Jim Harbaugh stories.  They make me happy because I empathize with his athletic director, who has to embrace or at least tolerate the level of crazy Harbaugh brings to his work as football coach at the University of Michigan.

Working with crazy people is exhausting no matter how good they are at their jobs.  As a program director of talk radio stations, I’ve found that sometimes the best hosts are also the craziest.  Let’s face it, just as it is not the wisest choice to tie your family’s financial health to the performance of pampered 18-22-year-old athletes, people who talk to themselves alone in a studio for hours at a stretch usually have a couple of screws loose.

Coaches and hosts also have this in common – they require intense energy from management to make sure they don’t burn down their program or station.  Some coaches actually become radio hosts, although I doubt Harbaugh ever makes that switch.

Harbaugh hasn’t achieved success necessary to be considered the best coach in the Big 10, but he certainly brings a level of bananas that rivals any coach in college football history.  And he was at it again yesterday.

Here is the conversation that has been reported to have taken place between Harbaugh and Ohio State head coach Ryan Day during a Big 10 coaches conference call yesterday:

I got goosebumps when I read this and cannot wait for October 24th, or whenever this game winds up being played.  Nothing like honest contempt to hype a matchup – especially an already contentious rivalry like Ohio State and Michigan – and Harbaugh and Day are clearly not meeting midway between Columbus and Ann Arbor for beers and wings.

As a sidebar to the this story, an interesting nugget was shared on al.com about how Harbaugh lost the recruiting battle for a five-star offensive lineman Isaiah Wilson.  During a visit to the his home, Wilson says Harbaugh did something odd,  “Remember when (Michigan) first got the deal with Jordan? He just wouldn’t take off his cleats. He came to my in-home visit with cleats on his feet. And I have hardwood floors, and he’s just walking around with cleats, bro.  We looked. My mom was coming in hot, asking ‘Why could he not have taken off his shoes?’ After that, it was over. Super weird.”

Sometimes, Harbaugh being ‘super weird’ works for Michigan.  Other times, not so much.  For college football fans – as well as psychiatrists – Harbaugh is money in the bank.  He’s always in the middle of some strange conflict with his boss, rivals, players, recruits, and pants.  And college football thrives on drama.

So does radio.  If Harbaugh ever leaves coaching, he would be a madman on the radio for some poor bastard of a program director who might not last six months as his boss.  Doubt it happens, but if Harbaugh turns to radio to make a buck, we’ll listen.  How could you not?