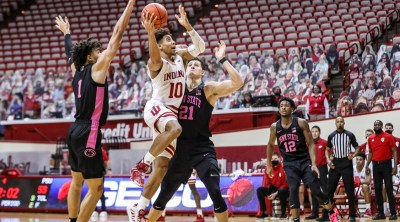 Rob Phinisee with a nice play that few Indiana fans enjoyed as much as they should have.

When it comes to Indiana Basketball, there is a problem that is impossible to overlook any longer.

It’s not Archie Miller, the coach of this group that nearly lost to a very mediocre Penn State team in overtime Wednesday.  It’s not Rob Phinisee, Al Durham, or Trayce Jackson-Davis – players who are certainly not trying to play without easily recognizable passion.  And it’s not recruiting – Miller has been able to get virtually every Indiana kid he targeted until Trey Kaufman, and he has no bearing over this team – or the previous three.

No, the problem with Indiana Basketball is much more insidious than those obvious targets.  The challenge IU Basketball seeks to overcome stares back at each of us every time we look in the mirror.

Indiana Basketball, I have seen thine enemy.  And he is us.

Expectations of fans like you and I are outside the realm of reason.  Landon Turner, Calbert Cheaney, Steve Alford, Scott May, and Ted Kitchel have exhausted their eligibility, and while Bob Knight calls Bloomington home again, his coaching days are over.  The seats in the balconies that used to fill with rabid fans were all but empty even before COVID-19 robbed them of their ability to hold the ample rears of IU fans from Bedford, Paoli, Mitchell, and Linton.

Indiana’s days as a championship level basketball program have ended, but like parents of kids who still believe Santa Claus slithers down our chimneys to deliver presents, those who know better are reluctant to say it out loud.  Dreams still exist that a sixth championship banner might be hung from the rafters at Assembly Hall more than 33 years after the last one began gathering dust.

Indiana fans continue to watch games in the hope the the Hoosiers will return to form as a smart, well-coached, tough team that wins through force of will and clinical fundamental execution.  Seniors from the last team answering that description are now 40 years old.  The youngest Hoosier to cut down the nets IU fans covet most is now 51.

Game after game and year after year, we watch, yell at the TV, and curse the coach and players who cause our frustration without realizing our emotional wounds are self-inflicted.  They come via our unrealistic expectations.  We hear about incoming freshmen and project them into a class that will rival Knights final great group in 1989 that would have been good for at least one championship if not for Ted Valentine’s whistle and Alan Henderson‘s knee.

We watch Indiana win a hard-fought overtime game against Penn State and shudder over the utter incompetence of the defense allowing the Nittany Lions to tally 85 points instead of celebrate Phinisee’s late defensive excellence and game-winning basket with 12-seconds left.

Yet we view this never ending cycle of misery as an Archie Miller problem or Tom Crean problem or Mike Davis problem instead of a problem best solved by each of us by divorcing our historical database from an evaluation of the present.  We blame the AAU culture, social media, and unrealistic NBA dreams for the perceived lack of willingness to sacrifice toward a common goal.

Which do you believe is easier for you to control – IU’s roster wakes up tomorrow believing in the outdated concept of a loss being life’s worst penalty, or your acceptance of Indiana as a mediocre program that cannot be compelled to improve because of your ardent wishes?

Instead of asking repeatedly, “What are they doing?” during Monday night’s game against Maryland, we need ourselves what we are doing.

The correction for your anger with the Hoosiers lies within each of us – not Miller and his players.  Enjoy the wins, and let the losses go.

One thought on “Indiana Basketball fans are frustrated, and only they can solve that problem”