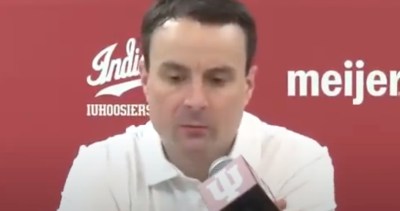 The time has come for Archie Miller to pivot around or over the brick wall against which he constantly bangs his head.

Indiana Basketball under Archie Miller appears determined to do the same thing again and again hoping for different results.  The results, now in a fourth year, have not been different.  The 81-69 loss to Purdue was similar to all the other results Millers’ Hoosiers have earned against the Boilermakers.

IU’s defeat last night was Miller’s sixth without a win.  The average deficit of those losses has been 11 points.  Indiana looks eerily similar from game to game and season to season as they languish in the bottom half of the Big 10.  Their misery against Purdue stretches farther back that Miller’s arrival in Bloomington.  Tom Crean lost five of his last six against Matt Painter‘s Boilermakers, but Miller has been on the job long enough to own the recent lack of success against his in-state rival.

As a counterpoint to Miller’s intractability during duress, I searched for stories about great coaches who adjusted when times got tough.  I came across a pretty well known moment during Urban Meyer’s time at Florida when his Gators turned the corner and established Meyer as one of the top leaders in the game.

Using the offense he developed at Bowling Green and Utah, Meyer was out-schemed at LSU in a 21-17 loss.  The Tigers blitzed ever time Florida went empty backfield, and Florida had no counter punch as Meyer tried to operate his offense with former coach Ron Zook’s roster.

After the game, Meyer threw his playbook in the trash and resurrected parts of Zook’s offense, including the implementation of a fullback.  The following week, Florida beat #4 Georgia 14-10 in the World’s Largest Cocktail Party game at the Gator Bowl.

Meyer put pride and dogma aside and did what was necessary to win.  That’s what great coaches do.

As I watch Indiana operate with very similar schemes and behaviors game after game and season after season, Miller appears to be unwilling to do the same thing.  There are wrinkles that IU implements, but it seems Miller is convinced that his Hoosiers can succeed only by improving at doing what he demands of them in the way he demands it, rather than catering to their collective and individual strengths.  He appears unwilling to throw the playbook in the trash and focusing on winning rather than prideful adherence to his ideology.

We aren’t at practice or in meetings and have only the games as evidence of Miller’s leadership, the achieving the same results again and again suggests the same operational methodology.

The result of whatever is going on behind the scenes at Cook and Assembly Halls has been winning percentages of .516, .543, .625, and .571, and exactly zero winning seasons in Big 10 play.  Miller’s current team has two Crean recruits remaining – Al Durham and Race Thompson – so these are now Miller’s guys who should be able to function well in Miller’s system.

Miller keeps saying things like “It’s on me,” in postgame press conferences.  He said it again last night, and with a stretch of five games looming against Iowa, Rutgers, Michigan, Illinois, and Iowa (again), I expect to hear it a few more times, and he will be right.  At some point, the responsibility for entrenched mediocrity – unless there is a drastic change in results – will fall on the desk of the man paid $3.5M per season to win games and graduate student-athletes without cheating.

Coaches who bang their heads against brick walls tend to bleed before finally being carted away.  Miller needs to take a page out of Meyer’s playbook, walk around or climb the brick wall, and find a way to win.

The banging – and losing – has to stop.