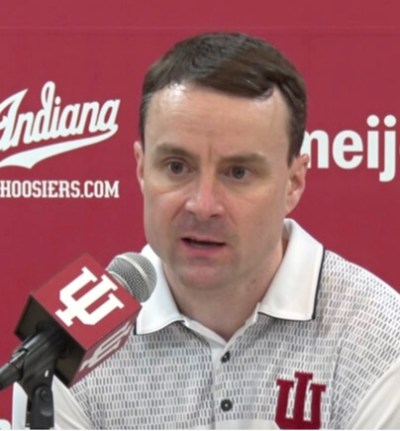 Archie Miller‘s seat is not nearly as hot as many might believe. His position is secure through next season unless something drastic happens.

Indiana coach Archie Miller said some interesting things last night after Indiana lost in overtime to Illinois.  He knows what’s on the line, but appears not to be willing to do what is necessary to motivate a consistent effort from the Hoosiers.

For all four of his seasons as Tom Crean’s replacement, Miller has provided mediocrity spiced with occasional upset wins.  At 9-8, IU is in danger of missing the NCAA Tournament for the fifth straight year (it’s likely IU would have been invited last year, but there was no guarantee).

I enjoy watching Miller’s press conferences after a loss as a form of self-flagellation.  If you are a fan of painfully reliving losses, here are some of Miller’s comments, followed by my explanation of what they mean.

“I think our team is getting better. It is hard in this league when you not only have to play well but you have to be super tough at the right times. You have to able to make a couple plays, whether it is a loose ball, made free throws, or whatever it may be. We have to grow out of that because I think we can play anybody but we are having a hard time finishing things off.  The good thing is we have another opportunity on Sunday against a great team.”

The problem is not necessarily finishing things off but eliminating the mental lapses early on that put the team in a precarious position toward the ends of games.  Lane violations, missed defensive assignments, silly passes, missed free throws, and business decisions on defense all lead to a final possession for the game that Indiana cannot convert.

Illinois was good enough to overcome an indifferent first half with withering defense in the second.  Indiana was not attentive to detail in the first half at a level that punished Illinois for laying back on defense.

There are two Indiana players who got after it for 40 minutes last night.  Armaan Franklin and Race Thompson were tough and grinded hard throughout the game.  Two out of five showing up every possession is not enough for Indiana.

The “I think our team is getting better” nonsense from Miller needs to stop.  It’s just silly banter from a coach who appears more interested in being positive with players than holding them publicly accountable.  Miller doesn’t need to put his players on blast with the media after every loss, but cushioning them with a hollow compliment after a loss at Assembly Hall is not Indiana-like.

He should also shelve the talk about how tough the Big 10 is.  We know the Big 10 is the best basketball conference top to bottom in the country.  Yes, it’s a challenge to win in the Big 10, so either find players capable of matching Illinois, Iowa, or Wisconsin’s toughness or go to a less-rigorous league.  It’s unbecoming of the coach at Indiana to talk about how hard it is to be “super tough at the right times.”  It’s Miller’s job to recruit and inspire toughness.

Toughness should be a given at any program because it is one of the few things in basketball that can be controlled.

On Jerome Hunter not dressing:

“There is nothing to really talk about with Jerome. Jerome was a coach’s decision and it’ll continue to be a coach’s decision as we continue to go through the next 33 days that we have left in the regular season. He has a chance to earn his way back onto the floor. He practices every day. He lifts weights. He does everything, but he is not going to take the floor again until the coach feels he is in the right frame of mind to number one lead himself in the right way and number two has the bigger picture in mind in terms of protecting our team at all times.”

“Jerome is a good kid. He is a good player. We could have used him tonight. The bottom line is, when he is right and concentrated on what he is supposed to do, he can help us. I don’t think right now he can help us until he shows me that. That is it for that. It was my decision and it will be to be determined when he plays again.”

I tend to get caught up in discipline and accountability for student-athletes who run afoul of behavioral expectations, but judging from Miller’s language in his comments about Hunter – specifically the phrase “protecting our team at all times” – I surmise this penalty was prompted by a violation of COVID-19 protocols.  Sounds like he spent time in very close proximity with a person or group of people who are not affiliated with the basketball team.

While that is a big deal, it does not rise to the level of a “pack your bags” violation.  Hopefully, he learns that his decisions have an impact upon others, and when he comes back he’s ready to be in the right place defensively at the right time.

If it sounds like I’m down on Miller, of course I am.  Indiana is 9-8.  If IU fans, alums, and administrators are not down when Indiana is 9-8, there is a different set of problems that need to be addressed.

I’m not close to buying that athletic director Scott Dolson should make a change from Miller unless the exact right person is available.  I believe IU might be on the precipice of jumping a level.  The roster is going to get older, losing very little depth.  This isn’t about the realities of a $10.5M buyout – it’s about the possibility of a quality basketball product returning to Assembly Hall.

Next year, this will be Miller’s team lock, stock, and barrel.  If there is not marked improvement in results, a different conversation will need to take place.