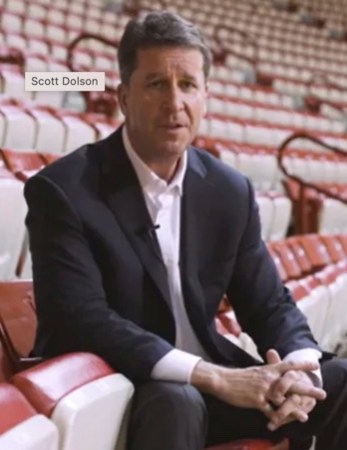 Indiana athletic director Scott Dolson is going to earn his salary in a couple of weeks as he steps out on a skinny limb to either retain or replace Archie Miller.

Will Archie Miler be back for a fifth season as Indiana’s basketball coach?

Social media is filled with terse messages from angry IU fans who have had enough.  Last night, they wanted athletic director Scott Dolson to fire Archie as the team plane landed in Bloomington.  That did not happen, even after his program’s latest humiliation at the hands and dunks of Rutgers.

A small sect of reflective and sober fans understand that the Hoosiers have another three tests left in the regular season.  This bizarre team that has defied expectations – both good and bad – all year, and they might just run the table to land a spot in the NCAA Tournament and cool Miller’s seat.  It’s a long shot, but possible.

Assuming that doesn’t happen, Indiana will watch the NCAA Tournament on TV for the fifth straight year.  When Miller was hired, athletic director Fred Glass laid out the expectations for the program very clearly.  Indiana is expected to contend for championships – both Big 10 and national.  Obviously, they have fallen well short.  In fact, IU has gone five straight years without  a winning conference record.

Smart people will tell you that Miller will be tough to fire because of the buyout terms that will force the university to pay Miller every dollar owed him through the end of his seven-year contract if they pull the trigger.  That comes to a whopping $10.5 million to pay Miller to sit on the beach drinking Corona like Snoop Dogg.

During a normal year, IU could make some calls to raise that kind of bread.  Because of COVID, IU’s athletic department is already underwater by $40-$60 million.  That means they have already been working over alums to try to hold things together until they can better deal with the shortfall.

Simple logic – the kind best loved by media – tells us that waiting for Miller’s buyout to hit 50% after next season is the smart play.  That makes the nut a much easier $3.5 million, and with COVID restrictions mercifully evolving out of our lives, the Hoosiers could move on from Miller quite easily.

Sadly, collegiate athletics is not that simple.  If Dolson is hoping Indiana fans are willing to invest financially and spiritually in a team led by a mediocre coach they know will be replaced as soon as it is feasible, he is misguided.  That kind of short-term thinking may be more costly to IU than biting the bullet to finally hire the right coach for this program.

Not only will fans unplug from the program, so will recruits.  Miller as a lame duck might be the head shot that finally renders obsolete Indiana Basketball as we know it – or have known it.  Financial prudence might cause IU more longterm harm than Bob Knight‘s boorishness or Kelvin Sampson’s indifference to NCAA rules.  Rebuilding will be delayed by yet another year, and this fading jewel of a basketball program may never recover.

The balconies of Assembly Hall that sit empty this season because of COVID, may remain forever empty because of apathy.

These are perilous times for Indiana Basketball, and not just because the regular season is going to conclude with games against #3 Michigan, Michigan State team in East Lansing, and a Purdue team Miller has never beaten – at least not as Indiana’s coach.

My advice to Dolson would be to get basketball moving forward as quickly as possible.  If the timing is right to hire the coach to steer the program out of this forever circling mediocrity, hit the throttle and damn the torpedos.  If that coach isn’t available, ride out Miller’s fifth year while giving him all the authority he needs to elicit disciplined execution from a roster that appears not too worried about consequences for noncompliance.

And please do all of it without convening a blue ribbon panel of check writers to sign off on the hire.