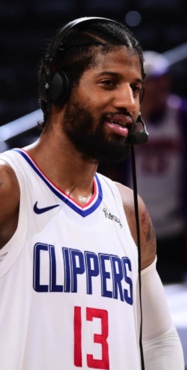 Every time Paul George talks to the media, I silently beg him to stop talking. It’s only a matter of moments before he reveals himself again to be a fraud.

Some professional athletes say all the right things after a loss.  They honestly assess their shortcomings, congratulate the winners, and promise to work hard to avenge their defeat.  Los Angeles Clippers forward Paul George is not among them.

George’s Clippers lost to the Phoenix Suns by 21 last night in a game that sent the Suns to the NBA Finals and the Clippers to that long dirt nap of an offseason.  Following the loss, George was asked what might have happened in the series if not for Kawhi Leonard‘s injury.  His response was what people who know him would have guessed, “We’d be going on.  This series would be a lot different. Talk about one of the best players in the league being out, yet we were inches away from getting to the next round.”

Can you imagine Michael Jordan saying something like that when Scottie Pippen played horribly during game seven of the 1990 Eastern Conference Finals because of a migraine?  Or when Pippen caught a Bill Laimbeer elbow in the first minute of the elimination game of the 1989 ECF and sat the rest of the game?  Jordan did not say, “We would be going to the Finals if only Scottie was healthy!”

What Jordan actually said was, “These things happen for some reason, and you have to deal with what you have. You have to take your lumps and move on.″. That’s what a champion says.  Actually, that’s what a six-time champion-to-be says.

That might be the only time I ever compare George to Jordan, and rightly so.  While Jordan has not always bathed himself in glory with his comments to the media – or in The Last Dance – but George has been routinely weak if not downright deceitful with the media dating back to his time with the Indiana Pacers.

Somehow, some way, George has managed to carve out a brand where meaningful productivity and winning have little bearing upon his public persona.  Is George a nice two-way player who can help a team win a championship as it’s third option?  It seems like he could be, but he has never been to the NBA Finals, so we don’t know.  Is George’s presence so weak during moments when championships are won or lost that his teams can’t overcome him?  Maybe.  He’s only 31, so there is hope that the light will eventually go on and real words that represent a winner might finally escape his lips.

There may come a time when George overcomes adversity instead of embracing it.  We found out last night that time is not here yet.