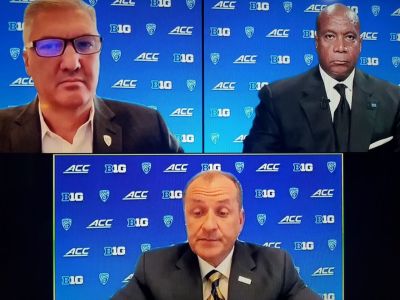 The Big 12 never had any hope of sustainability after Texas and OU agreed to join the SEC, but yesterday’s Zoom with commissioners of the Big 10, ACC, and Pac-12 signed its long overdue death warrant.

The alliance between the Big 10, ACC, and Pac-12 means the Power Five just became the Power Four.

As a person who has sat in meetings among administrators and bureaucrats in a variety of field – media, sports, and health care among them – I am in a rare position to translate nonsensical gobbledegook into what it actually means.

During yesterday’s Zoom with the media, ACC commissioner Jim Phillips said, “Let me put it directly.  We want and need the Big 12 to do well. The Big 12 matters in college athletics. The Big 12 matters in Power 5 athletics, and our FBS group. And so I can just tell you that we’ll be watching what occurs here — and obviously this transition isn’t supposed to be taking place for another four years. This group in particular will be very interested to see what happens and to do everything that we can to try to make sure that, again, college and athletics look similar to what it is today about the numbers of opportunities, the commitment to one another.”

What Phillips means is, “We hope the Big 12 dies and will work together as the three-headed hydra of collegiate athletics to ensure its death so we can then split the spoils.”

We know this because Big 12 commissioner Bob Bowlsby was not on the call.  This alliance does not include his conference.  Now that Texas and Oklahoma are being welcomed into the SEC, the Big 12 will exist as nothing more than a patchwork of athletic departments with very little brand value and national importance.  It has much more in common with the American Athletic Conference than the Big 10.

The gravity has always pulled toward the inevitable construct of four conferences with 16-ish teams each.  The Big 12 was always the odd conference out.  This was acknowledged when the Big 12 allowed Texas to form the Longhorn Network, which caused a massive financial imbalance among members in favor of Texas.  Without equanimity, a collective (like a conference) cannot exist.

How can Iowa State or Kansas State compete with Texas, given the financial disparity?  The answer is they can’t, and that dooms the conference to fail.

The Big 12 bought an extra decade by kneeling before Texas, but as a result it doomed itself as the fifth player at the Euchre table of college athletics.

The strong survive and the Big 10, ACC, and Pac-12 communicated that loud and clear yesterday.