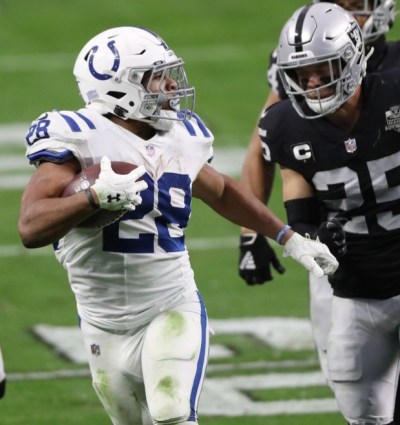 Regardless of yesterday’s misery, Jonathan Taylor can still run the Colts all the way to Inglewood in February!

So Carson Wentz was less than perfect, and Jonathan Taylor wasn’t used enough.

So the defensive front couldn’t put meaningful pressure on Raiders QB Derek Carr throughout most of the game.

So Wentz missed a wide open T.Y. Hilton on a pass that could have sealed the game.

None of it matters because the Titans beat the Dolphins, and everything that would have been possible had the Colts beaten the Raiders – as they should have – is still possible.

If the Colts win this Sunday in Jacksonville against the woeful Jaguars, they will slide into the playoffs as the five or six seed.  If they lose, there is a chance the Colts could still find their way in as the six or seven.

This is not ideal most years, as winning the division would guarantee at least one home game in the postseason, but after starting the season 0-3 and 1-4, it will do.  That is especially true because the Colts are riding a four-game road winning streak, with three of the wins against two playoff teams (Bills and Cardinals) and another (49ers) that might squeeze in.

Yesterday’s game wasn’t a lot of fun to watch, but given the parity in the AFC there is still a very viable path to every bounty that would have been there for the Colts if they had destroyed the Raiders.

So put yesterday out of your head, and get ready for a win and in blowout against the worst team in the NFL followed by bonus football that can still end in SoFi Stadium on February 13th.