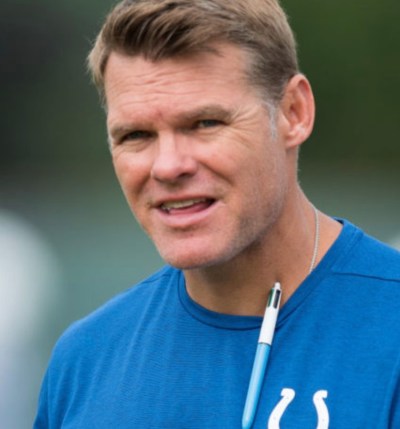 Colts GM Chris Ballard has a four color pen clipped to his collar for a reason. He’ll use all four to come up with a solution for his quarterback problem!

The Colts have a quarterback problem – again.

It’s not that Carson Wentz sucks as a franchise QB.  He doesn’t.  Wentz is worse than terrible.  He is mediocre.

There is nothing worse for an NFL franchise at quarterback than a guy who is capable of winning and losing in equal measure.  Wentz would be a first ballot inductee into football’s Hall of Hope.

Wentz is not good enough to walk into a locker room as the unquestioned gunslinger who can get a team to a Super Bowl.  He is not Joe Burrow, Aaron Rodgers, Patrick Mahomes, or Josh Allen.  He is also not a young unknown who might get to that level – like Justin Fields, Mac Jones, or Trevor Lawrence.  And, he’s also not so bad he requires an immediate replacement.

That puts Colts general manager Chris Ballard and head coach Frank Reich in the untenable position to either go all in or fold after the flop behind a 50/50 hand.  If Wentz can find humility and improve just a little bit as a game manager, the Colts make the playoffs and everyone – especially owner Jim Irsay – is happy.  If he remains obtuse and arrogant – as many inside the Colts organization find him, the ship capsizes after another failure of a season and the crew might just go with it.

The Colts were remarkably stable at the quarterback position all the way back to 1998, the year Peyton Manning was selected with the first overall pick and became a hall of famer.  When the Colts said goodbye to Manning, another first overall pick was used to bring Andrew Luck to town.  Because of injuries to Luck and then his oddly timed retirement, the Colts have cycled through Scott Tolzien, Andrew Luck, Jacoby Brissett, Philip Rivers, and Wentz as opening day quarterbacks since 2017.  The Colts have not had the same quarterback as a primary starter since 2013 and 2014.

It’s hard to be good without some consistency at the most important position in football, and so while the Colts crave excellence, Reich and his offense would also benefit from a bit of consistency too.

As if the Colts need the decision to keep or dump Wentz to become even more complicated, after the ’22 season, his contract has an out that allows the Colts to say goodbye for free.  If the Colts decide to move on now, he chews $15M in cash and cap.  Three days after the NFL year starts, add another $12M to that number.  I’m not a huge math wiz, but speaking for Jim Irsay – paying $15M for Wentz to go away mandates the replacement be an obvious upgrade.

That’s job one for the general manager of an NFL team – find a quarterback you can win with, and keep him.  If Ballard does that, all this building from the inside out stuff he proffers can work.  If not, it doesn’t make any difference who the left guard or three tech is.  The Colts will continue to wander as a team too good to fail into success and too flawed to win a championship.

This offseason for the Colts is going to be fascinating, and the quarterback challenge is going to be the most critical puzzle for Ballard to solve during his tenure in Indy.

Sometimes, it’s fun to be Chris Ballard.  His work this offseason will either establish him as a generational general manager or a soon-to-be former GM.

Can’t wait to see how he plays this very difficult to win hand.