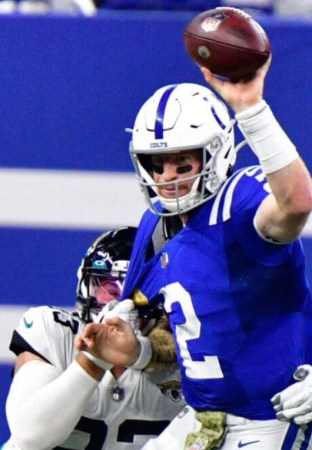 If we can trust the tea leaves, Tarot Cards, and Chris Ballard’s brief glimpse into the Colts future plans, Carson Wentz is as good as gone.

The only question worth asking about the 2022 Indianapolis is whether Carson Wentz will be the quarterback.

General manager Chris Ballard and coach Frank Reich answered that question several times each in their media availabilities at the NFL Scouting Combine yesterday, and both danced around it.  Reich said he still believes in Wentz, and Ballard confirmed a meeting will be held in the next 10 days among owner Jim Irsay, Reich, and himself where a decision will be made.

I’ve been reading and re-reading the transcripts of both appearances for a glimpse into the future like a voodoo priest scanning tea leaves spilled onto Tarot cards.  Finally, in a dream last night it came to me – a phrase repeated again and again by Ballard, “Ultimately, we’ll do what’s best for the team, for the Colts. Both in the short-term and in the long-term.”

Why would he choose the phrase “Both in the short-term and in the long-term” to describe his process in evaluating the quarterback?  You don’t need to be an intellectual ninja to understand that Ballard is not seeking a one-year patch like Philip Rivers to step into the breech.  It also means the Colts aren’t going to draft a developmental project as a starter.

It means something more, something that deals directly with Wentz.  There is the matter of Wentz’s contract that needs to be considered.  Wentz is guaranteed $15M for next year, but the Colts can save $13.2M in bonuses if they cut him prior to March 18th.  There is also the matter of a potential out next offseason where the Colts could release Wentz without penalty.

Many of those who are in the “Keep Carson” camp cite the contractual out next offseason as a reason to give Wentz another bite at the apple with complete health and minus Covid related complications.  And I get it.  Wentz was one win either in a home game against the Raiders or a road tilt against the NFL’s worst team away from a playoff berth.  As a result of team-wide mediocrity or fatigue, for which Wentz was at least partially responsible, the Colts lost both games.  One more win, and Wentz leads the Colts into a postseason where anything can happen.  Running it back might get the job done, and if not, fire him cost-free in a year.

But that phrase – “…in the short-term and in the long-term” – paints a mindset of a team that is not going to screw around for a year to see if Wentz can get it right just to save Irsay a few bucks.  Ballard wants to solve this problem, not kick the can down the road to see if faith in Wentz is justified.  He knows how important the quarterback position is, and that a lack of a suitable solution will doom his era in Indianapolis and likely his career as a general manager.

We have been around Ballard for more than five years, and I have heard him be clever, condescending, jovial, and irritated.  What I have yet to hear is dishonesty.

How could a man as smart as Ballard make a case to fans (or Irsay) that he is sure Wentz is both the “short-term and … long-term” answer at quarterback?  The answer is he can’t.

I believe Ballard said what he meant yesterday in the several mentions of how the outcome of this quarterback positional autopsy with bring a solution that serves “both in the short-term and in the long-term.”

So say the tea leaves, Tarot Cards, and Ballard as he squeezed some honesty into a day of platitudes.

And who is Wentz’s replacement?  The cards and leaves have not shared that with me yet.