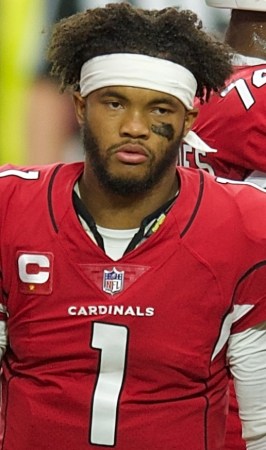 Kyler Murray is sitting out OTAs as he tries to negotiate a raise from his paltry $5.5M average income.

Our society has lost its collective mind.

Not only is Arizona Cardinals quarterback Kyler Murray sitting out OTAs because of the “disrespect” he feels as he is scheduled to be paid over five-million bucks for the 2022 season, but pundits are defending his stance because other quarterbacks make so much more.

Teachers in Phoenix are paid an average of $60K, which mean they would have to work instruct Arizona children for 92 years in order to earn the salary that insults Murray.  Phoenix police top salary is $78K, which means they keep the peace for over 70 years to net Murray’s salary.

It’s true there are five NFL quarterbacks scheduled to earn a total of $40-million or more in 2022 (including prorated bonuses), so Murray may consider himself underpaid.  And no one would consider him irrational for being a little nervous about injury given the fifth year option for his services in 2023 is $29.7M.  But how did $5,000,000 dollars become such an insult that a quarterback skips workouts.

OTAs are optional, but the likelihood of any injury is minuscule because contact is prohibited.  All players can sit out if they choose, but there is an assumption of team-first behavior and commitment for those who choose to show up.  That is especially true for a quarterback, THE position of leadership in the NFL.

Quality of play is an important measure of value for Murray as the Cardinals and fans in Arizona weigh how they should perceive Murray as either covetous or deserving.  The Cardinals regular season record over three seasons as a starter is 22-23-1, and his playoff record is 0-1.  In that 34-11 playoff loss to the Rams, Murray was 18-34 for 137 yards, zero TDs, and two interceptions.

Murray has been named to two Pro Bowls, and is without question a top 10 QB in the NFL (ranked seventh in QBR).  The question is not whether Murray is worth more than he is currently paid, but whether a signed contract means something, anything – and whether he is as committed to the Cardinals’ success as he is to his own wealth.

This is a bad look for Murray, and the opinion that he is justified in sitting as a ploy to compel the Cardinals to negotiate an extension is ridiculous.  That our notion of wealth has spun so far outside reason that $5.5M has become a reason to boycott work-related activity is lunacy.

One thought on “Kyler Murray scoffs at being paid $5.489M as Arizona Cardinals quarterback; sits OTAs”