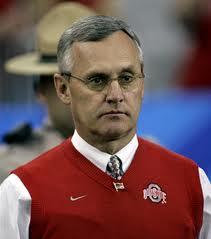 Would you buy a used car from this man?

Chum is in the water in Columbus, Ohio, and the sharks are looking for kicking legs.

You know when the byline has three names, a newspaper is expending maximum resources toward a story, and that it’s going to result in bad news for the guy in the center of the storm, so when Jill Riepenhoff, Mike Wagner, and Randy Ludlow’s names showed up atop the latest Columbus Dispatch report of misdeeds and strange doings with Ohio State athletics, what followed was unlikely to be fun reading for embattled (that’s the official writers word for ‘fighting for his job’) coach Jim Tressel.

Here are the highlights of the post, which is available by clicking here:

The investigation was initiated after The Dispatch found in public records that at least eight Ohio State athletes and 11 athletes’ relatives bought used cars from Jack Maxton Chevrolet or Auto Direct during the past five years. The investigation will involve outside experts and examine at least 50 sales, focusing on whether the athletes received improper benefits.

The common thread in those two dozen transactions was the salesman: Aaron Kniffin, who has worked at both dealerships.

Kniffin told The Dispatch that he has sold cars to at least four dozen OSU athletes and their relatives, that the OSU compliance staff directed them to him, and that university officials reviewed all documents before sales were final.

Archie said that he has spoken to Kniffin only once, never reviews sales documents and has not directed players to any dealerships.

Public records show that in 2009, a 2-year-old Chrysler 300 with less than 20,000 miles was titled to then-sophomore linebacker Thaddeus Gibson. Documents show the purchase price as $0.

Mauk could not explain it. “I don’t give cars for free,” he said. Gibson said he was unaware the title on his car showed zero as the sales price. “I paid for the car, and I’m still paying for it,” he said, declining to answer further questions.

The two collectively have decades of NCAA compliance experience. Neither had ever heard of so many athletes buying cars from the same salesman.

Car ownership among athletes has been a recurring issue at Ohio State dating back to Maurice Clarett in 2003 and extending to the current NCAA investigation of OSU memorabilia sales in which, among other things, one player traded Rose Bowl watches for a vehicle. Four of the six players suspended for selling items for tattoos – or their relatives – also bought cars from the dealers.

By then, Kniffin, who was working for Maxton, had sold cars to football players Gibson, Chris “Beanie” Wells and Maurice Wells while they were still in school. The mothers of both Wells’ also bought cars. At the time, Beanie’s mom lived in Akron and Maurice’s lived in Maryland.

Kniffin also loaned cars to quarterback Terrelle Pryor, including his own for a three-day test drive to Pennsylvania, where Pryor lives.

In other words, uh-oh.  Not just because of this report, which has denials from Kniffin throughout, but because there are journalists running all over Columbus trying to find as many smoking guns as they can.  I drove by a neighborhood Easter egg hunt a few weeks ago, and the kids scurried around like ants on a cupcake in search of the hidden bounty.  Journalists on a story like this are like those kids after eating a pound of chocolate.

There is no stopping until they find whatever they are looking for.  That’s why it’s always better to simply come out with the truth.  The alternative is for reporters, who got into the business because they saw “All the President’s Men” and fell in love with the investigative journalism of Bob Woodward and Carl Bernstein, to pour over every public record and talk to every booster and former player they can find.

When they finally find the guy with a conscience, and they always do – game over.

If it isn’t this story that ends the debate about Tressel’s future in Columbus, there will be another and another and another.  There are violations committed by boosters and athletes at the top football programs on a regular basis.  No one disputes that, and without a head start, reporters generally leave the retelling of those tales to the internet rumor mongers.

Once the pros are finally awakened, it’s time to start packing because you can damn well bet that one of the 85 scholarship kids who rotate through every four or five years or their benefactors are going to talk.

Yep, the ravenous reporters are swimming in circles trying to find a leg among the driftwood, and they are built to do just that.  The truth is out there, and it’s going to take Tressel down.

5 thoughts on “Ohio State Football Heads Even Further South with New Report – Jim Tressel Is Gone, But Doesn’t Know It Yet”