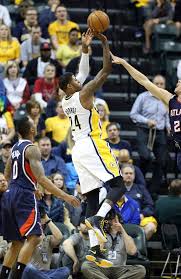 The game was never in doubt after the first three defensive possessions by the Indiana Pacers that led to uncontested Atlanta Hawks baskets.  The Pacers Paul George made certain of that.

George is not Kobe or LeBron, but he is good enough to lead the Pacers to a 107-90 beat down of the Hawks to take a 1-0 lead in this opening round best-of-seven series.  How important was this game?  When the home team takes the opener in the first round, they win the series 88% of the time.

Tyler Hansbrough made a series of plays in a short burst to salt the game away, but it was George’s all-around excellence that put the Pacers over the top.

Twenty-three points, 11 boards, and 12 assists were game highs in all three categories.  George was easily the best player on the floor, and despite hitting only three of his 13 shots, was offensively superior.  He was also key in holding professional shooter Kyle Korver to only five points on 2-of-7 shooting.

Basketball, like boxing, is all about matchups.  If the Hawks want to have any chance to move on, they are going to have to figure out a way to keep George off Korver, and vice versa.  The advantage to the Pacers is too mammoth to be overcome elsewhere.

Back to Hansbrough for a moment.  He wasn’t anywhere near the player of the game, but his gritty and physical play sure makes life less fun for those he matches up against.  Up 87-78 with 7:41 in the fourth, Hansbrough missed a layup, fought like hell for the rebound, got fouled, and knocked down two foul shots.  On the next offensive possession, Hansbrough is fouled grabbing the rebound from a George miss.  He makes the first free throw, but claws for the board after missing the second.  The possession ends with a George Hill three-pointer.

Crisis averted.  Pacers go up by 12, and the game is over with 6:39 to play.  Skill is key, but wild man effort is imperative in the postseason, and Hanbrough brings game-changing effort.  Lance Stephenson’s stat line was good with 13 points, five boards, four dimes, three steals, and three turnovers, but his effort was also excellent.

Indianapolis native Jeff Teague played well for the Hawks with 21 points and seven assists, but people who followed him throughout his youth basketball and high school career saw a typical Teague performance.  For most of the games he played, he gave the impression he would rather be somewhere else, and all of a sudden he was at the bucket.  People thought he scored six when he was in the seventh grade, but the score sheet showed 18.  That was the reason he was not selected as an Indiana Junior All-Star. Teague got the last laugh by being a first round draft pick after his sophomore season at Wake Forest.

The crowd was in reasonably solid playoff voice.  I wasn’t exactly the same manic full-throated throng from 2000, but at least the fans outside Area 55 and the G2 Zone paid attention to the action.

Game Two will be played Wednesday night at 7:30p.  If you haven’t seen the Pacers yet, Wednesday would be a great time to start.  The Pacers today were a lot of fun to watch.