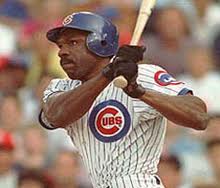 Andre Dawson had one of the quickest bats in major league history, a cannon for a right arm, and now is using another asset to help owner Tom Ricketts find his checkbook – the truth.

Dawson spoke with the Chicago Sun-Times Gordon Whittenmyer and said some insightful and obvious things:

“I never thought I’d see the Cubs with a small-market payroll.”

“Obviously, you’ve got to spend money to win.  There’s no guarantee you’re going to win, but you’re talking the Chicago Cubs, and I’ve always been of the mindset that there’s no reason why that organization from year-to-year shouldn’t be right there battling for a playoff spot. I don’t think it’s at all a matter of resources.”

“You owe it to the fans. I don’t know what the predicament is now, but you’ve got to put that ballclub in the elite group where it belongs, because you have fans all over the country. You’ve got Cub fans in every city, probably just as many as the home team.”

From the Hawk’s mouth to the guy who thinks he’s the God of Chicago’s northside ears.

As Whittenmyer points out, the Cubs have the third most expensive average ticket price in baseball, and minus the insane contract inherited from the Tribune Comapny’s grim regime for the thoroughly mediocre and wildly inconsistent Alfonso Soriano, the ill-advised piece of idiocy that led to a four-year/$52 million deal for the definitively ordinary Edwin Jackson, and premature and silly deal for overhyped shortstop Starling Castro, the Cubs do not share the wealth provided them by the addle-pated droves who still show up to watch Triple-A players in Cubs unis.

Cubs fans do deserve more, and so does Ricketts for overspending on baseball operations president Theo Epstein and general manager Jed Hoyer, whose claim to genius at Wrigley Field is expense reduction at the expense of on field quality.  Ricketts could have hired me to blow the damn thing up and pay guys like Dave Sappelt with peanut concessions, and I would have no problem finding a way to lose 100 games.

The only potential championship ballplayer currently on the Cubs roster is second baseman Darwin Barney, who should be the angriest man in the city for being forced to waste prime years of his career on a team that is committed to riding a once proud franchise straight to the bedrock underneath Wrigley.

Dawson’s words should echo in the minds and hearts of Cubs season ticket holders who were sold on the opportunity to overspend this season as it guarantees that right in future years when the farm system finally starts churning prospects to the major league level.

If you went to a restaurant, and the owner told you, “Hey, you know what, our steaks are going to suck for a couple of years while we bank enough cash to remodel the place.  Then our steak will be really good.  In order to get the good steak down the road, you are going to have to choke this garbage down.  If you keep coming, you are guaranteed a table in 2016!”

The restaurant owner would have to dodge the steak you’d throw at him as you him around the dining room, and he would be bankrupt in days.

Not Ricketts.  Nope.  He stands in front of the media with a straight face and declares that the Cubs will win a World Series if the City of Chicago will green light a plan to upgrade Wrigley Field.  Fans continue to nod their approval and vote for the Ricketts authorized demolition of the Cubs with their checkbooks.

To hell with this clod.  For the 2014 season, keep your money.  Tell him that you’ll come back when the Cubs are worth a damn.  You’ll spend when he shows the slightest interest in building a reasonable on-field product.  You’ll come back when the Cubs fire president of business operations Crane Kenney, who is determined to whore out the image of the team and ballpark for ludicrous purposes – like showing movies in the outfield on summer evenings during road trips.

Former GM Jim Hendry was a genial boob, but this cabal of crooks is much worse.  They smile and shake your hand while using 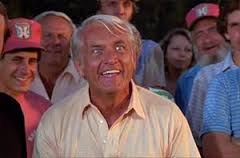 the other hand to pick your pocket.  Chicagoans are used to that with their politicians, but not with Cubs ownership.

Ricketts didn’t buy Wrigley Field and a baseball franchise when his family spent $850 million of daddy’s money for the Cubs.  He bought the dumbest fan base in the history of sports.

It would be nice if Dawson could help Ricketts find his checkbook like Al Czervik’s henchmen helped Judge Smails find his, but I’m afraid the only voices that he would listen to will come from the silence of empty seats.

2 thoughts on “Chicago Cubs – Andre Dawson Knows the Truth About the Cubs, and Isn’t Afraid to Tell It”