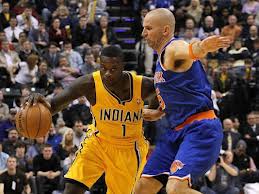 Lance Stephenson posted a career high 13 boards to go along with 11 points in today’s win.

Coaches who tell the truth are a lot more interesting in postgame press conferences than those who alibi or give oddly technical explanations for a loss.

New York Knicks coach Mike Woodson is nothing if not honest, and when he said that the Pacers won because “they played harder,” but he wasn’t complete.  The Pacers also played with more poise in their 102-95 win.

With the hard-fought victory, the Pacers have earned home court advantage from the Knicks, and if they are able to hold serve at Bankers Life Fieldhouse in games three, four, and six, a battle with the Miami Heat (assuming they beat the depleted Chicago Bulls as expected) in the Eastern Conference Finals.

While the Knicks grimaced, whined, and ranted about every perceived slight, the Pacers continued to focus on the next possession.

Not that it means the officiating was perfect or even good (although I thought it was), but 21 fouls each were called against the Pacers and Knicks.

The Pacers outrebounded 44-30.  That speaks to effort, and that is why the Pacers are up 1-0 in this best of seven war between two teams that served as the other’s nemesis throughout most of the 1990s.

The Knicks were oddly consistent in their inability to score efficiently in the paint.  They shot seven times from inside the lane during each quarter, making only three in all but the second, when they knocked down four shots.  That totals 13-of-28.

The Pacers finished 20-of-31 in the paint, for a 14-point advantage in a seven-point win.  The Pacers shouldn’t get too happy with a guaranteed split on this first trip to the Big Apple in this series.  Carmelo Anthony is 2-for-22 from beyond the arc in his last four playoff games, and he won’t stay cold forever.

One other thing the Pacers can’t count on is the enormous productivity of D.J. Augustin, who scored 16 points in 13 minutes on five-of-six shooting, while Anthony had 27 points on 28 shots in 36 minutes.

Rebounds, and scoring in the paint – there’s effort, and that’s a win for the Pacers.

The only person left who was in the trenches during the glory days of Reggie vs. Starks and the Dutchman vs. Ewing in Pacers president Donnie Walsh who enjoyed a few years putting together this Knicks team before returning to Indy.  Most of the Pacers were still in diapers in 1993, the first of six times in eight years the Pacers and Knicks faced off in the postseason.

Game Two is Tuesday night at 7p on TNT. Expect the Knicks to re-engage with malice, and for Anthony to hit some shots.