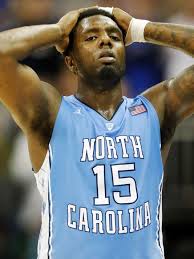 P.J. Hairston is at the center of a minor story that could become major.

On the list of corrupt university athletic departments, the University of North Carolina would not make my top 20, which means my top 20 needs some work.

The well-documented academic fraud issues were part of the equation that should have colored my image of UNC, but despite writing about it only five weeks ago, I was still surprised to read about some weirdness going on within the basketball program.  Scratching just under the surface of the P.J. Hairston arrest yields a smell that reminds me of the Ohio State problems that cost Jim Tressel his gig, and landed the Buckeye football program in hot water with the NCAA.

P.J. Hairston was arrested last month on a misdemeanor pot possession charge, which isn’t unusual for college kids.  It makes Hairston a dumbass, but the car he was driving when he was arrested is the real problem.

The 2013 GMC Yukon was a rental of convicted felon Haydn Patrick “Fats” Thomas.  When Hairston was ticketed for speeding on May 13th, he was driving a 2012 Camaro rented by Catania Farrington, who rented the car for a total of 54 days, while Thomas kept the Yukon for only three days, according to documents obtained by the Associated Press.

Guess with whom Catania shares an address.  Yep, Fats Thomas, who has two felony convictions on his record, and is facing charges from a December arrest on charges of possession of marijuana, drug paraphernalia and a firearm by a convicted felon, as well as maintaining a dwelling for selling a controlled substance.

In all, four different cars rented by Thomas or people living in Thomas’s house have received parking tickets on the UNC campus.

You know who else Fats Thomas is – he was the bouncer at the strip club that supplied the girls who accused the Duke Lacrosse team of rape.

He denied any ties to UNC Basketball in an interview with WTVD-TV, “I know they stopped before the road block and they [had] a discussion amongst themselves. And then, all of the sudden they get in trouble. The police said PJ was driving and I’m like, ‘Mykael, how are you going to let some dude drive a car you took from me?  Everything from that point when they got stopped by police – only those three guys know.”

The Mykael mentioned by Thomas is the guy that Thomas claims he loaned the car to to run some errands.  He was arrested along with Hairston.

Sounds like a guy who has been thinking a lot about how this looks.

And it looks bad for North Carolina basketball and Roy Williams in the same way tattoogate looked bad for Ohio State football and Jim Tressel.