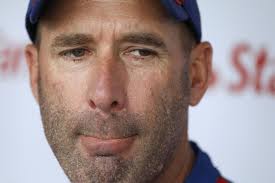 A stiff upper lip isn’t going to be able to hit for one of the least productive lineups in baseball.

Rick Telander wrote in the Chicago Sun-Times that Chicago Cubs manager Dale Sveum has no chance to continue in that position following the expiration of his contract after the 2014 season, and he’s probably right.  That’s a shame.

Sveum hasn’t won, but if John McGraw, Joe McCarthy, Billy Martin, and Tony LaRussa were cobbled together a four-headed super hydra manager wouldn’t have won more than 103 of the 255 games Sveum has.

The Cubs are terrible in almost every way, and still they have managed to stay within ten games of .500 through the all-star break.  Hell, the guy may be doing the best job of any manager in the National League.

More selling off assets will make the rest of the 2013 season even more difficult for Sveum, who is likely to lose starting pitcher Matt Garza, Alfonso Soriano, Kevin Gregg, maybe Nate Schierholtz, and if healthy David DeJesus.

But the Cubs need to perpetuate the ridiculous myth that they are trying to win now rather than build for 2016, so Sveum will probably be told to pack during this offseason, as Telander suggests, just as Edwin Jackson was signed to a four-year, $52 million deal prior to this season.

Fans and the Chicago media have bought into the building-for-the-future idiocy like it’s a fait accompli that once Javier Baez, Albert Almora, Jorge Soler, and Kris Bryant mature, banners will be hung.

Cubs fans were also very pleased that the Cubs have been very successful in signing 16-year-olds from Latin America who will be pillars for the Cubs once their potentail is tapped.  Christ, when the hell is that going to be – 2021?

Sveum has done nothing but play the cards he was dealt, and to make sure that the Cubs go out everyday and night to compete hard.  Even Alfonso Soriano appears to be playing hard.  Sure, Starlin Castro has been a train wreck until the last three weeks, but it’s not as if no one saw that coming.  He’s a dull-eyed and unfocused mope with a great ability to keep his hands back while deciding whether a pitch is worth an offer.

If Sveum with his tough guy tats and uncanny ability to never appear clean-shaven can’t get the attention of Castro, who better to try?

Luis Valbuena and Schierholtz are having the best years of their careers, and minus James Russell, the bullpen doesn’t have a decent arm for him the rely on.  You think I overlooked Kevin Gregg?  He’s been released twice in the last 10 months, and that happened for a reason that Cubs fans will be aware of soon enough.

Sveum is like a chess player asked to compete despite having only pawns.

If the Cubs make him a scapegoat after the season to try to gin up more ill-placed optimism by firing Sveum, I hope he walks out the door with a bunch of owner Tom Ricketts cash.  The misery he has been forced to endure should be worth the cash needed to underwrite a couple of years relaxing in Cabo.

As for the future past the apparently doomed tenure of Sveum, I’m curious what would make Cubs fans believe that Epstein and Hoyer are smarter or better at their jobs than John Mozeliak, who runs the St. Louis Cardinals.

Here is an idea of the level of management Epstein and Hoyer are competing against.  The Cardinals won the 2011 World Series, and followed that up by amassing five selections in the first 55 picks of the 2012 MLB Draft.

What the Cubs are trying to do, the Cardinals have been doing better while winning championships.

It’s way too early to judge Epstein and Hoyer negatively, but for the media and fans to scapegoat Sveum rather than reward him would be asinine.  Good for Telander, a columnist who makes sense a lot more than most.

One thought on “Cubs Should Give Dale Sveum an Extenision, Not a Pink Slip”