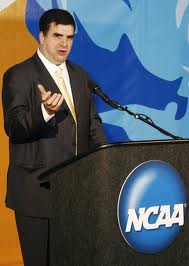 Talking to smart people about complex issues is endless fun for me, so the conversation on 1070 the Fan earlier today with former NCAA Executive Vice President Greg Shaheen was especially joyous.

Shaheen has a reputation for being “Ahead of the Curve” on 1070 the Fan with Hagan and Sterling Should Be Spectacular Todaya straight shooter, and he didn’t disappoint in both diagnosing issues in college athletics as well as offering solutions.

The NCAA is a bulky and bureaucratic member association that oversees college athletics at all levels, but is especially scrutinized for its handling of the FBS level schools in the five major conferences.

The SEC held its media circus earlier this week, and commission Mike Slive used roughly half his remarks on the state of the conference to critique the work of the NCAA, as well as offer direction in how the association should lead the battle to help prevent head injuries in college football.  Shaheen, who is a paid consultant for the conference, offered his thoughts on some specific remarks.

If you are interested in why the NCAA sometimes seems to operate at odds with the logical solutions that fans seek in how college football and men’s basketball operate, Shaheen’s comments are especially relevant and illuminating.

He also spoke about the tendencies for major conference basketball teams to schedule cupcake nonconference opponents, and the effect that decision has on the chances for teams to earn at-large bids in March Madness – an event for which Shaheen was responsible for running through 2012.