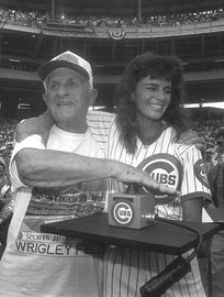 Not sure if this button was actually connected to anything, but it was a big deal to the guy who hit it to supposedly illuminate Wrigley Field for the first time.

Twenty-five years ago tonight, an exceptionally old man named Harry Grossman wheezed, “Let there be lights!”, pressed a button on a box with some wires sticking out of the bottom, and the lights came on at Wrigley Field for the first time.

Grossman was one of the few remaining witnesses to the Cubs last World Series triumph in 1908.  He spoke of watching past icons like Frank Chance, Johnny Evers, and Mordecai “Three Finger” Brown, and was a cute story for a brief time.

That game was rained out, and the actual first night game was played 24-hours later against the Mets.  I was at that game, and yelled “299” at Gary Carter every time he came to the plate.  He had been homeless for 76 as he tried to hit his career 300th.  I was young, obnoxious, and filled with self-righteous loathing for a catcher who called himself, “The Kid.”

Rafael Palmeiro went 3-for-4, the thoroughly brutal Frank DiPino got the win in two innings of hitless relief, and Rich Gossage picked up the save.

The road for the installation of lights was paved by then commissioner Peter Ueberroth’s decision to strip home field advantage for the Cubs in the 1984 NLCS because they wanted an extra night game in the series.  Oddly, the clinching fifth game against the Padres was played during the day in San Diego, but no matter, the ball was rolling, and the Cubs began their limited night schedule less than four years later.

Prevailing wisdom for decades was that the Cubs could never win a World Series at Wrigley Field because playing in the daytime exhausted the team comparative to the rest of Major League Baseball.

Currently, the Cubs play 27 of their 81 home games at night, and they have requested to up that number to a possible 55.

So, have the Cubs actually fared better since the installation of the lights, as was suggested would happen by those who felt the Cubs played tired late in the year because of the relentless adjustments from playing at night on the road to daytime games at Wrigley?

There were factors at work that affected the Cubs beyond the timing of the first pitch, but the Cubs record in the 25 years prior to the first night game left them 203 games below .500, while the aggregate record 25 years following is a minus 143.

For the majority of the years prior to Grossman’s night in the spotlight, the Wrigley Family owned the Cubs, and the management of the team fell on to the shoulders of men entirely unprepared to build a consistent winner.  Following the sale of the Cubs to the Tribune Company in 1981, Dallas Green brought the team to a level where it could compete, and they earned a berth in the postseason in 1984 – ending a 39 year run of futility.

The problems for the Cubs have been more closely tied to poor personnel decisions than game times.  Day baseball didn’t keep the Cubs from keeping the best pitcher in baseball on the roster when Greg Maddux left for Atlanta despite his desire to stay in Chicago.  Maddux went on to win 194 games in 11 seasons as a Brave.

Day baseball also didn’t keep then general manager John Holland sober enough to complete a trade with the Cincinnati Reds for Frank Robinson.  According to the Jim Russo book, “Super Scout”, Holland passed out before the trade, which was agreed to in principle, could be completed.  The Orioles swooped in as Holland slumbered and sent Milt Pappas, Dick Simpson, and Jack Baldshun for the outfielder who would win the American League triple crown the following season.

The Cubs are the Cubs, and 81 night games wouldn’t have kept Alfonso Soriano lunging at sliders low and away, Jerome Walton from inexplicably packing on an additional 25 pounds after his rookie of the year season in 1989, or relief pitcher Mike Capel from giving up grand slams.

The Cubs lose because they haven’t been very good for a very long time, and all the lights in the world wouldn’t have changed that.

Now, new Cubs owner Tom Ricketts has told fans that video boards, a hotel, and additional signage will bring a World Championship to Chicago.  Sorry, fans heard the same story a quarter century ago, and are still waiting.