These wings are some of the best athletes in the world.  All of these players are either listed as SG or SF on their rosters even though some of them do and can play power forward (Carmelo Anthony, LeBron James).  Let’s take a look at the rankings: 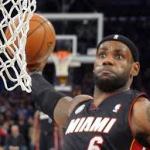 Do I really have to write anything or try to justify this ranking.  Four-time MVP, back-to-back NBA titles and Finals MVP awards, 255 double-doubles, 36 triple doubles and 2 Olympic Gold Medals.  If there is one player who has any chance to match Oscar Robertson’s triple-double average for an entire season, it is James.

He has the ability to completely take over a game in any aspect he chooses.  Critics told him he could not shoot and what does he do.  He shoots over 40% from three.  Critics said his post game was unpolished.  He went to work and developed an above-average post game.  I say we tell him he cannot average 35 points, 15 rebounds, and 11 assists in a season.  Let’s see if he can. 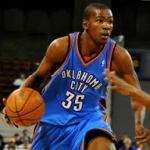 The only player in the league right now who has the raw ability to match James blow for blow is Durant.  No one is more fun to watch play than Durant.  Until this year he played with emotion held in check, but he started to show cracks in 2012-2013 receiving 12 technicals and getting thrown out of the first game of his career.

Durant has started to show an ability to get teammates involved in the game, upping his assist totals each of the last three years (2010-11 – 2.7 apg, 2011-12 – 3.5 apg, 2012-13 – 4.6 apg).  He also notched all three of his triple-doubles last season.  If Durant can continue to improve assist totals and show a complete game (career highs in both steals and blocks last year) he will be the player who will take the throne has the best player in the NBA from James. 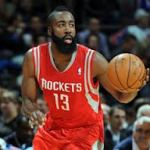 Just think how good the Thunder would be, go ahead think about it.  The number two PG and the number two and three wings in the game.  I am going to go out on a limb and say that would be the best backcourt in the game.  Harden got his chance to be the main weapon for the first time last season and he did not disappoint.  He averaged 25.6 ppg, 4.9 rpg, and 5.8 apg all obviously career highs.

What some people will point to is the fact that while Harden’s usage rate went up, his overall efficiency was the worst of his career.  But that is to be expected.  The more a team relies on a player, the lower his efficiency.  Look for Harden’s efficiency to improve with more experience being the first option, the addition of Dwight Howard, the continued improvement of Chandler Parsons, and the draft of PG Isaiah Canaan. 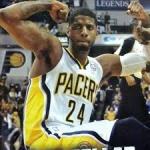 Some people will not agree with this selection, but I think George is primed for a breakout season.  Yes, he was an All-Star last year and had career highs across the board, but I think George has another All-NBA team written all over him this year.  With Danny Granger out last season Frank Vogel threw George into the fire making him the go-to guy and George responded well.  The bad news is George turned the ball over way to much at nearly three per game and that number went up to four per game in the playoffs.  The good news is George is a year older and that only makes him 23. The youngest player on this list.

What separates George from the majority of the players on this list is his ability to go one-on-one with every player on this list.  On the defensive end, George needs no help.  He allows the Pacers to play straight up defense and gives Roy Hibbert the ability to play under the rim and not shade help to elite wings.  Look for George’s efficiency to greatly improve with the experience gained last season and the expected return of Danny Granger in a support role. 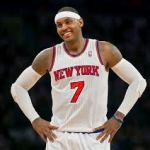 Carmelo is a professional scorer and there is nothing wrong with that.  He has the most complete offensive game of anyone on this list.  He can shoot from three, he has the best post game of any wing, and has a mid-range game to keep defenders off balance.  People unfairly criticize Anthony for his inefficiency, but his shooting numbers over his career are 45.6% from the field while shooting 33.4% from deep (his season-to-season numbers from three vary wildly).

His efficiency numbers in 2012-2013 were his best while being in New York, and second best of his career.  He has the ability to take over games on the offensive side of the ball, and almost single-handedly willed the Knicks to force a game seven in the conference semis last year.  Anthony has holes in his game, specifically on the defensive side of the ball, but he makes up for that with superior offensive output.  The next step for Anthony is to cut down on his three attempts and get to the line with a little more consistency. 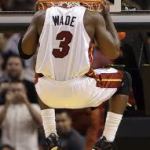 Balky knees have dropped Wade from a player that would have been top three on this list before the start of last season to number six this season.  He is a career 28 percent shooter from deep and if his knees cannot hold up this is definitely a serious problem for an aging Wade.  This is a selection I might come to regret as the talent is still there to be a top three guy and Wade could have one or two more All-NBA first team years left in the tank.  He still put up 21.2 ppg to go along with five apg and five rpg.

If Wade can improve to become a mid-thirties percentage three point shooter his career will extend a few more years.  The picture I just cannot get out of head was watching a non-explosive Wade struggle in the playoffs.  I will chalk that up to playing all summer on the Olympic team.  With a full off-season to get healthy, we could see a rejuvenated Wade in the beginning of the season, but can he still bring it night in and night out for 82 games plus 20 or so in the postseason?  Only time will tell. 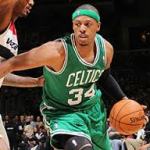 Pierce has been on the downside of his prime for the past three years, but somehow has been able to hold it together.  Let’s take a look at Pierce’s numbers since the last championship the Celtics won in 2008:

Pierce is seemingly defying age holding his scoring numbers steady while improving both his rebounding and assists the last five years.  The twelve double-doubles were Pierce’s most since the ’05-’06 season.  Pierce will turn 36 during this upcoming season, but his game is not about explosiveness or athleticism.  He will be valuable as long he can still bury a 17 footer in a defender’s face and knock down open threes.  Look for Pierce’s numbers to drop in the scoring department as he joins Joe Johnson and Deron Williams in New Jersey, but also look for his efficiency to improve as he will not be looked upon to score nearly as much. 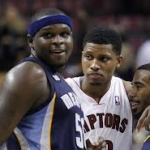 This was a struggle as there are a group of guys who could go from 8-15 (really 9-15 once you see number 10) and there really is not much of a difference.  I go with Gay because his ceiling is just a little higher than the others.  He has all of the tools to be top five guy on this list and at one point most people would have had him higher on this list.  Let’s look at Gay and a mystery player on this list from the 2012-13 season:

Player #1 would be the number four man on this list, Paul George.  Gay is not far behind.  He has everything required to an All-NBA selection he just needs to put it all together again.  Before the Gay trade the Raptors were 17-30. After the trade they went 17-18.  I think Toronto has a real shot to grab one of the lower seeds in the East and with Gay playing the type of basketball people expect from a man making nearly 18 million dollars, they can make some noise.  The potential is there, the only question is can he live up to it again. 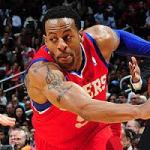 I give Iguodala an edge on this list because he is a defensive stopper.  Like Paul George, Iguodala is a player you can stick on an elite wing and not have to slide help over.  He is quick enough to guard shooting guards and big enough to take on small forwards.  Iguodala saw his numbers take a serious hit last year, but the Nuggets asked him to be someone he is not, a three point shooter. Only once in his career has Iguodala shot better than 36 percent and that was during his last year in Philadelphia  What you should see from him this year are straight line drives and fast break jumpers.

With the space provided by sharp shooters Stephen Curry and Klay Thompson look for Iguodala to have much better numbers and to be far more efficient from the floor.  The defense will always be there, but it is time for Iguodala to get back to what he does best on the offensive end. 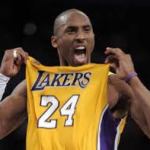 I might have to re-write this come November.  If the rumors are true and Kobe will be ready for the start of the regular season he will be placed at number two on this list.  A few years ago I was not a Kobe fan – even through the majority of this season I was not a Kobe fan.  But when you rupture an achilles, knock down two free throws, and then walk off the floor you get my vote of approval (something I am sure Kobe would be very proud of).

Last season was Kobe’s most efficient year on the offensive side of the ball as he had a career high in assists and his best shooting year since the ‘08-’09 season.   He has transformed his game much like Jordan did when age started to wear away at his athletic prowess becoming a jump shooter who has the ability to take you to the rim.  There are very few players you can add to any roster and instantly make them a playoff team and Kobe is one of them.  The only time the Lakers did not make the playoffs was in 2004-05 – the last year Kobe missed more than 10 games.  As long as his achilles does not give him any issues look for Kobe to be Kobe.