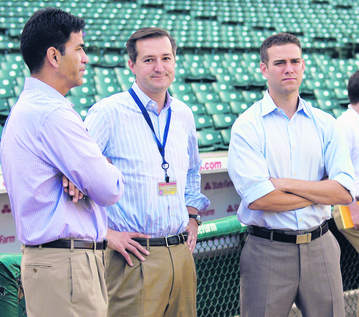 This is the brain trust Cubs fans are forced to trust as the franchise razes the big league club to build a new team. How are they doing? (From left, Senior Vice-President/Scouting and Player Development Jason McLeod, Tom Ricketts, and Theo Epstein)

There is some bad mojo going on at Wrigley Field.  Fans and media claim that team president Theo Epstein and Jed Hoyer are pressing all the right buttons in trading veterans for farm system bulk, and that the youngsters left behind are being tutored to play better at the major league level.

With Matt Garza, Scott Feldman, Alfonso Soriano, David DeJesus, and those dealt in 2012 gone, the full weight of success and failure falls upon the kiddie corps.  If the young guys are improving, there is hope for a brighter tomorrow.

So let’s grade the progress of the four position players and two starting pitchers who seem to be foundation pieces for the future of the Cubs.

Here’s a look at the offensive numbers for young starters who have been with the Cubs for more than a year.  This doesn’t include a player like Junior Lake, because there is nothing to compare his stellar numbers to.  We also include pitchers Jeff Samardzija and Travis Wood.

The RBIs, Runs, and other non-percentage statistics have been projected for the full 162 game season.  They are listed in order from earliest season to 2013.  The earliest season used is 2011 because it’s the last year of the Jim Hendry regime.  Have the coaches brought in by Theo and Jed helped?

Barney’s primary value will always be because of his defense, but it would be a positive to see some growth in getting on base.  There is still value here, but he is an offensive non-factor who has become even more inert over his three full seasons in Chicago.

The Well is to shallow to gain any real insight into whether he has really regressed or not.  After only getting to the plate 190 times in 2012, the number that would tend to show a slip can’t really be trusted.  His .754 OPS in 2012 was significantly higher than his .701 in 2013, and the RBIs at an identical 22 from 2012 to 2013 despite twice as many plate appearances thus far don’t point upward, but the overall grade is incomplete.

This is a terrible year by any measure for Castro.  It should be noted that runs and RBIs are not entirely in the player’s control, but they still show a stark decline.  All wells flow from getting on base, and this year, Castro’s OBP is a pitiful .275.  From a developmental standpoint, the Cubs and Castro have taken so many steps backward here that he may be irreparably damaged.

Rizzo played just over half the season in 2012, so the sample size is small, but he got to the plate 368 times, so where relevant we’ll multiply both the 2012 and 2013 numbers to reflect a full 162 game season.  In his second year, Rizzo is not far off his 2012 campaign.  The loss in batting average is almost entirely made up for in additional plate discipline which leads to extra walks.

Wins and losses are hard to hang specifically on any pitcher, but they are a relevant piece of the puzzle given the Cubs’ relative consistency in losing 90+ games.  If the Cubs had won 95 one year because they scored a ton of runs one year and then were lost offensively in the next two, that would make comparison useless.  Jeff became a starter in 2012, so only 2012 and 2013 are used.

Finally, a success story.  Travis Wood has been a very pleasant story this season for the Cubs.  His potential has been talked about for a long time.  He’s on a path that many productive lefties take, and the deal for his that sent Sean Marshall looks very good right now.  I’m not sure the Cubs can claim credit for Wood’s evolution into a all-star, but if we are going to cast blame for the mercurial Castro’s demise, sharing some love isn’t out of line.

The Cubs as a whole have have a chance to reverse their trend of scoring less runs than in their previous season for the first time since 2008 – it had to happen sometime.  In 2008, the Cubs scored 855 runs their highest total since 1930 (the year Hack Wilson set the RBI record with 190).  Since, they have scored 707, 685, 654, 613, and this year they are pacing to cross the plate 632 times.  More good news, and Cubs fans will take it where they can get it, they are pacing to allow only 692 runs – virtually the same number allowed in 2007 (690) when they qualified for the playoffs.

More good news is that Dale Sveum is a quality manager, who job is virtually impossible.  The Cubs are roughly 150 runs scored away from the playoffs, and Sveum isn’t going to get that done on his own.  He needs players who can get on base and drive in runs, and while fans are all twitter over Javier Baez, Jorge Soler, Kris Bryant, Albert Almora, and Mike Olt, there is no evidence to lead anyone to conclude that once they arrive in Chicago, the pieces are in place to develop them into consistent run producers.