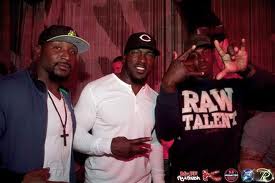 Aldon Smith (right) will try to find yet another reason to host a party today at Candlestick Park against the Indianapolis Colts.

The Indianapolis Colts are preparing for a stiff challenge this afternoon in San Francisco, as the 49ers are still smarting after being waxed last weekend by the Seattle Seahawks.

The 49ers turned the ball over five times in Seattle, and had trouble running the ball in any traditional way.  Running back Frank Gore has been less that impressive through two games of the 2013 season with 60 yards and 30 carries.

Defensive pocket wrecker Aldon Smith gave his liver a workout Thursday night and Friday morning, but is ready to go after resting in lockup after being arrested for suspicion of drunk driving and possession of marijuana.

The 49ers are very talented and productive on both sides of the ball, and they will not doubt be on an emotional edge as the game begins in an hour.

There is a lot more good than bad for the 49ers headed into this game, but the Colts have as many reasons for optimism as pessimism.

Five Reasons the Niners can find a way to lose, without mentioning Andrew Luck

Five Reasons the Niners can beat the Colts

This smells like an ugly game for the Colts, but with Andrew Luck under center, the Colts always have a chance.  They were prone to blowouts last season – five of their six losses were by at least 12 points, and three were by 20 or better.

Anything can happen on Sunday, so Colts fans can watch and hope for luck and Luck.