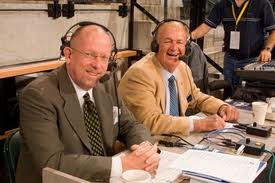 Indiana Pacers radio play-by-play Mark Boyle is a fascinating guy.  Every conversation involves questions and commentary that are unfiltered.  Talking to him requires focus because if he asks a question, he is genuinely curious about the response.  There are a lot of people who ask questions to be polite, and then check out when the answer comes.

You can tell people like that anything.  Not Mark.

Yesterday, I walked over to the cool kids table at the post-golf dinner for the Pacers Golf Outing because Mark, Brooke Olzendam, and Kevin Lee were laughing, and I knew that meant they were mocking someone in media.  I wasn’t disappointed.  Mark is one of the great all-time critics (much funnier than the old cranky bastards in the balcony of the Muppets), and Brooke was funny too.

Kevin and Brooke left, and Mark asked, “What are you doing?  Just the website and weekend deal (kentsterling.com and “Ahead of the Curve on 1070 the Fan every Saturday from 11a-1p)?”

I told him that was it for right now, that I’m working hard generating content because I really enjoy that.  Then I told him that I learned to dislike being a part of management over the years.  That was an easy thing to share with Mark because four years ago, I fired him, and surely he would understand my disdain for the people who relish sitting in conference rooms determining the fate of each employee every year – if not more often.

The more complex truth is that I enjoyed some aspects of management a great deal.  Working with talent to improve their performance and consistently become the best version of themselves on-air was endlessly validating.  Seeing something in a board-op, producer, or applicant and giving them an opportunity to talk into a microphone to entertain and inform audiences was always thrilling.

There were occasions when firing people could actually be enjoyable.  If a person was an ass or behaved on-air in a way that didn’t measure up to our brand, I didn’t lose sleep.  It didn’t happen often, but now and again, I fired people for the right reason (anything but money).

More problematic for me was the chore of managing up.  Most people on the programming staff of a radio station, the editorial staff of a newspaper, or the news staff at a TV station believe that the only managing being done by their boss is in making sure their work measures up to their bizarre sense of what he or she believes will compel listening, reading, or viewing.

Unfortunately, just as much time is spent trying to strategize the best route to getting a plan okayed by upper management as assessing needs and putting together the plan to address them.  It’s the job of the department manager to keep upper management from flexing their own muscles and determining course based upon their gut.

For all the dozens of times I heard someone say, “My gut tells me, …” I never heard anything that made sense following it.  My difficulty was never in saying the right thing after that to bring the ship back to the correct course, but in keeping my face from betraying my frustration, dismay, and occasional horror.

For me, moving into management was an easy choice.  I always wanted to be talent, but kept getting more money and promotions to move toward management, and I felt that because of improvisational training in Chicago I had a chance to help talent.  With a son and wife who were kind enough to wait out the lean years, I felt compelled to follow the cash and figure out the rest.  Looking back, I would have been better served doing exactly what I’m doing today.

Most of the managers for whom I worked were or are very smart.  They do their best to keep the ship running smoothly, while trying to do the same thing I didn’t like, and that’s keep crazy from taking hold within a conference room that could derail years of good work.

Because I find it amusing, I’ll relate a story about an idea one of the GMs for whom I worked.  This was a guy from outside the market where I worked at the time who was destined to depart within one year of this piece of genius.  He decided that the radio station would buy a diner, and that out morning hosts would serve dual roles on-air and in the restaurant.  The host would also cook for customers.  The co-host would be the server.  The sports anchor would sit at the front counter and read the sports.  The show would air from their each morning.  Jesus.

Listen to that idea in a conference room without rolling your eyes.

The same GM decided to pair a couple of politically opposed people in afternoon drive.  One, a guy who never wanted to listen to anyone, and hated the idea of a co-host.  The other was a local woman who was sharp enough to know that the guy was a grade A boob.  The GM saw me in the stairwell and told me of his decision.  Looking stunned, I said, “You think that’ll work?”  He turned angry, and told me in no uncertain terms that he did.

I got lucky to have a general manager hired by Emmis with whom my quirky personality was a good fit, but there aren’t a lot of Tom Severinos out there.

The quality of the radio being done by people I worked with and helping get my son through school financially will have to suffice as rewards for a 20-year diversion away from what I wanted to do all along.

I love to create content, and that is where I’m casting my lot.

That’s a much better answer than what I gave Mark yesterday.