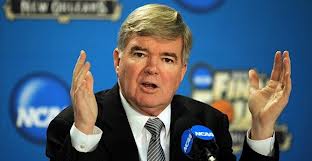 NCAA President Mark Emmert should take the number of times he is asked the same question as a sign that the answers provided by the NCAA are lacking in clarity and consistency.

What does the NCAA stand for?  Is it an oversight organization that determines athletic eligibility and runs championships among its members, or is it empowered to require universities to behave in the best interests of higher education and competitive balance?

I don’t think anyone at the NCAA headquarters has a clue.  The mission statement for the NCAA on president Mark Emmert’s webpage is, “Our mission is to be an integral part of higher education and to focus on the development of our student-athletes.”  I’m all for brevity, but what the hell does that mean?

Did the scholarship reduction for Penn State’s football program help the NCAA serve as an “integral part of higher education” or “focus on the development of student athletes”?  If it did, I don’t know how.  What it did was insert the NCAA into a moral guidance role for college football.

Penn State didn’t break any NCAA rules, but when the news broke about former assistant football coach leveraging his access to Penn State University facilities to lure kids into areas where their innocence could be plundered, the NCAA decided to issue a stiff penalty.

Sandusky was allowed to maintain a presence at the university after his pedophilia was reportedly known within the athletic department.  That cast Penn State as an enabler in Sandusky’s miserable and evil existence, and it made the NCAA’s decision all the more justifiable.

There were those who did not like the NCAA penalizing a program based upon the laws of God  and the State of Pennsylvania rather than rules it crafted to maintain a level playing field among universities.  But if making too many phone calls to recruits can cause the evisceration of a basketball program like Indiana’s, how can Penn State football continue to operate when it allowed a pedophile free reign within its halls?

The NCAA took a stand.  It issued a sanction just short of the death penalty that stripped scholarships, bowl eligibility, vacated wins from 1998-2011, and five years probation, as well as levied a $60 million penalty.  And now it restores some of the scholarships as a “reward” for aggressively adopting the recommendations in the Freeh Report when that should have been the goal all along.

Just what in the name of Walter Byers is going on here?  Sandusky mutilated the bodies and souls of trusting children.  Penn State ignored it.  The news was released.  The NCAA tried to recalibrate the passion Penn State University shows for its football program.  The governor of the State of Pennsylvania sued the NCAA.  The son of a coach, who reportedly valued his friendship with Sandusky more than the innocence of the children who were being raped, continues to relentlessly carp about the unfairness of the penalties – particularly the loss of wins that make Joe Pa’s record as a coach appear more ordinary.

Emmert has an interesting quote on his page at NCAA.org, “Then you all go to your Rotary Clubs and say that in college sports we care about amateurism. And they look at you and say, ‘$10.8 billion and amateurism? Help me understand that.’ We have to make sure people know what we stand for and what we care about.”

The problem is not one of communication, but of internal understanding.  Emmert argues with himself, and there lies the rub.  Amateurism is a sham principle used to keep the pot of cash intact for the powerful.  Businesses everywhere have been trying to figure out how to avoid paying employees in the same way universities have with athletes.  The NCAA doesn’t know who and what it is, and so it wanders from kind to stern to generous to stingy.

The NCAA is like a terrible parent, and the universities respond as would a poorly disciplined child.  The rules are indecipherable, and the penalties are unevenly applied.  And then in this case – reversed.  When questioned about the reversal, Emmert says relaxing the scholarship reduction is not a reversal at all, but a reward for compliance.  Talk about terrible parenting.

If the NCAA wants its members to run wild, they are doing a hell of a job of eroding whatever minuscule remaining level of trust in the discipline that is designed to keep members in line.

Predicting the NCAA’s next move isn’t difficult.  Take what makes the least sense, double it, and release it using confusing and vague language.