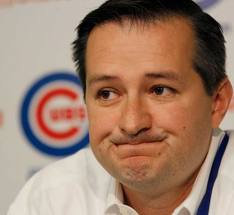 “Who just said Robinson Cano? Get out! GET OUT!”

Meetings happen all the time at businesses to uncover the solutions to problems.  Rooms are filled with people of all stations at a company.  The problem owner (the boss who convened the meeting for the purpose of finding a creative solution to his most troublesome worry) identifies the issue to be discussed, and the facilitator writes it on the board at the front of the room.

The problem that Cubs owner Tom Ricketts most wants to solve is the erosion in the season ticket base.  Three years of unprecedented losing and little hope for improvement until 2016 when some of the highly touted kids will be ready to contribute have caused attendance to drop more than a half-million since 2008, and the season ticket renewal market is incredibly soft.

So at Tom Ricketts direction, the facilitator writes, “In what ways might we retain all 2013 season ticket holders, and cause overall attendance to return to the three-million fan level?”

The other numbers which are not shared in the media are the financials for concessions and swag.  Tickets are responsible for some game day revenue, but the business of Cubs baseball is separating you from as much of your cash as possible once you walk into Wrigley.  There is an average amount of money syphoned from fans for incidentals like beer, hats, programs, Frosty Malts, and the $11.50 Sheffield Dip sandwich.

Certainly, the Cubs are aware that losing now in order to win later (a spurious notion that will be debunked in a future post) would have a cost in the number of tickets sold, and worse in the number of tickets used.  That doesn’t keep Ricketts from convening a brainstorm to discuss creative ways to re-energize the fan base to the tipping point where they will pony up for tickets on the primary and secondary market.

There is a significant number of season ticket customers who are fans of cash rather than the Cubs, and as the secondary market has softened, so has their motivation to renew.

The first idea is to hire more people.  This is always the first idea that members of the staff advances.  The motivation is to relieve work load, but it’s couched in helping the business.  In this case, the idea is actually adopted to allow a group of people to work the phones to talk to those on the season ticket waiting list.  I am actually on that list.  In 2007, I was 100,010 from qualifying.  Living in Indianapolis, I obviously had no interest in making the purchase, and I doubt many on that list would feel differently today.  But accessing them can’t hurt.

So this meeting takes place and one of the ideas that a member of the staff offers is to win more games.  Nothing causes the turnstyles to spin like roulette wheels like 90+ wins.  The facilitator asks the group to focus upon that for a few minutes.  It’s determined that the cost of an immediate influx of talent to the level where the Cubs could compete in the National League Central would be $86+ million per year.  So that’s immediately scrapped.

The next element offered by a member of the resource group is an aggressive external marketing campaign.  Okay, the facilitator says, “Let’s drill down there.  What kind of marketing message can compel fans to re-engage?”

The next 15 minutes are spent talking about people who are Cubs assets that might move the needle.  Starlin Castro?  Fans don’t like him.  He’s seen as aloof.  The Cubs put him on that billboard a couple of years ago with Derek Jeter for which they were pilloried in the media.  Plus, he reeks of the problems that have caused the lost attendance in the first place.  A restaurant that puts pictures of its most reviled item on the menu is unlikely to see a spike in sales.

Anthony Rizzo?  He hit .233, and had a lower OPS than catcher Wellington Castro and outfielder Nate Schierholtz.  How about Jeff Samardzija or Travis Wood?  None of the current Cubs pitchers reached double digits in wins in 2013, so it’s tough to present any as a reason to motivate fan re-engagement.

How about the older guys that Cubs fans still love.  Soon-to-be 84-year old Ernie Banks is beloved, but after taking a look at the actuarial tables for life expectancy for a man of Ernie’s maturity, it’s decided that’s not prudent.

No, they answer lies outside the Friendly Confines.  Making a list of the free agents who could excite fans is futile for the same reason that hastening the rebuilding process is.  Signing Robinson Cano will require a minimum of eight years and $220 million.  The person who quietly mentions Cano’s name is asked to leave the room.  No idea is a bad idea in a brainstorm, except that one.

Okay, thinking outside the box, what about a manager?  Dale Sveum is not the most compelling communicator in the history of Chicago sports, and he cannot stay clean shaven long enough to photograph.  So who can the Cubs go get who might look great on a billboard, has Chicago roots, and maybe even played for the Cubs at one time.

Someone says the name everyone is thinking, “Joe Girardi!”  Holy crap!  That’s it.  The room is abuzz.  They have the answer.  Then, they talk about the financials.  What does the manager of the New York Yankees make?  Girardi is coming to the end of a three-year, $9 million contract signed before the 2011 season.

“Wait a minute, we can hire our billboard guy – the guy we can legitimately put on the cover of a program – for $5 million a year, and he’ll thank us?  Call Theo.  Looks like Dale is a goner.”

I’m not saying it happened exactly like that, but I’ve been in rooms where similar decisions were made that quickly and for those reasons.

Unless Girardi values geography over cash, comfort, and ability to win, he will never come to Chicago – unless the Yankees want him to – but there is more to the Sveum’s firing than Epstein deciding that the youngsters aren’t developing.