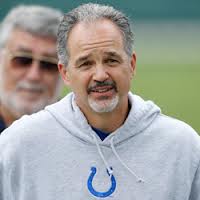 He helped turn 2-14 into 11-5, and is on the brink of clinching the AFC South in his second year, yet some fans want Chuck Pagano gassed.

Did you really think it was going to be that easy for the Indianapolis Colts?  Did you think 2-14 could instantly become consistent championship level football?  Do you believe the men running the other 31 NFL franchises are morons?

On the morning of Monday, October 21 – the day after the Colts ended the undefeated dreams of Peyton Manning and the Denver Broncos – fans saw the Colts as a potential Super Bowl contender.  Thirty-seven days later, there are angry callers to sportstalk radio stations who want changes made to the coaching staff.

One rube tweeted, “We allowed the wrong coach to leave for Arizona.”  #FirePagano isn’t trending, but that it exists at all is both an indictment against the intellect of fans, and a salute to their passion – as misguided as the results might be.

They say head coach Chuck Pagano is an ineffective leader, offensive coordinator Pep Hamilton is too conservative, and defensive coordinator Greg Manusky’s is not putting players in a position to succeed.  Just 37 days ago, these same fans were ready to book flights to New York City for  Super Bowl XLVIII.

Did Bill Belichick feed the Colts brain trust a big bowl of dumb soup?  No, these are the same guys playing the same game by the same rules, and the coaches are all smart people.

Sure, the Colts have been brutally bad for six of their last eight halves, but in those four games they have won two.  Granted, both victories required comebacks after miserable first halves, but they were both road wins against divisional opponents.

Pagano and his staff have been through the ringer before, so they know as Rick Venturi says, “every locker room is three straight losses from imploding,” and the fans are evidently a 2-2 stretch from losing their minds.

There is no point in reciting the well-documented litany of injuries that have ravaged the offense.  Every team has their share of physical maladies, and excuses in the NFL are for the unemployed.  Everyone else works to win next week’s game.

The Colts are 7-4 with a mediocre offensive line, a front seven who – minus Robert Mathis – isn’t going to scare anyone, a schizophrenic defensive backfield, and more playmakers rehabbing than playing.  They have Andrew Luck, a great kicker, and one of the top five punters in the game.

You want to take a shot at getting that active roster to 7-4?

This weekend at Lucas Oil Stadium, the Colts play the Tennessee Titans, the only team with any chance at all to challenge them for the AFC South crown.  Win and the Colts advantage balloons back to two games with the head-to-head tiebreaker in their pocket.  That would represent a de facto three game bulge with four games to play – two of which will come at home against the equally putrid Houston Texans and Jacksonville Jaguars.

Coaches get more praise than they deserve, and much more criticism.  No coach has missed a tackle, blown a blitz pickup, or overthrown a pass. NFL coaches can’t coach the slow to be fast, the weak to be strong, or the stupid to be smart.  They can’t heal the infirmed, and they can’t kick a ball through the uprights.

Click here to have your teeth cleaned/fixed by the best – Dr. Mike O’Neil at Today’s Dentistry

Fans need to blame someone, and with so much going in the crapper so quickly against two mediocre teams like the St. Louis Rams and Arizona Cardinals, the fingers are most easily pointed at Pagano, Hamilton, and Manusky.

The best advice for fans – and the Colts coaching staff – control what you can, and relax about the rest.

They say you can’t argue with stupid, but I can’t help but try.