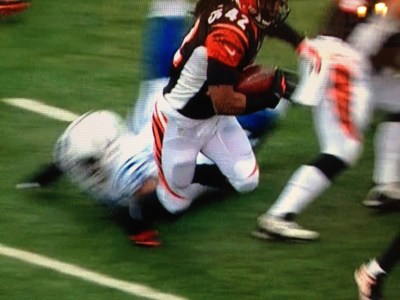 (Updated 8:10p to include transcript of Triplette’s post game interview with pool reporter.)

Incompetence is tough to hide with cameras following every move from multiple angles, and ironically it was the work of the cameras on a play at the end of the first half of the Indianapolis Colts vs. Cincinnati Bengals game that both gave Triplette the supposed indisputable visual evidence to overturn a call and be outed as inept.

‘The integrity of the game’ is a phrase that is bandied about liberally by people in the NFL’s New York office in levying fines and suspensions for players and coaches, but who has a more direct effect upon the integrity of professional football than a bad referee, and for the second consecutive assignment, Triplette has revealed himself to be a clown.

In his hands, the result of a play and thus a game cannot be trusted.

On fourth and goal from the Colts one yard line with 1:14 left in the first half, the Bengals opted to go for the touchdown.  Ben Jarvis Green-Ellis was ruled down by contact short of the end zone by the side judge.

The booth decided that it was close enough to warrant the use of replay, and Triplette retreated under the hood to take a look.  Despite obvious contact with Colts defensive lineman Josh Chapman that tripped Green-Ellis causing him to fall a foot short of the end zone, Triplette reversed the call and awarded the Bengals a touchdown that made the score 14-0 at the half.

CBS announcers assigned to the game, Greg Gumbel and Dan Dierdorf, called the reversal “unexplainable,” and at halftime, Boomer Esiason said that Triplette needs to find another line of work.

In the second half, Triplette blew another call when Bengals quarterback Andy Dalton threw a ball away under pressure.  Triplette ruled that Dalton was outside the pocket before releasing the ball.  Replays showed that not only was Dalton not outside the tackle box, but he was two steps to the left of the spot on the right hash where he received the snap.  It wasn’t close, and Triplette blew it.

One call led directly to a seven-point difference in the score that could not have been accounted for otherwise, and the other caused a fundamental change in the flow of the game although the drive ended with a Bengals punt.

Replay is supposed to be used to ensure that the officiating is as close to perfect as possible, but Triplette actually used replay to negate a sound call.  Combine this week’s awful performance in Cincinnati with the train wreck non-first down that harmed the Washington Redskins chance to beat the New York Giants, and the a clear and consistent pattern appears.  Jeff Triplette cannot be trusted to officiate another NFL contest.

Not only is there a reason to suspect that a game will not find its just result with Triplette officiating the contest, there is genuine well-reasoned doubt that it’s possible.

Google “Jeff Triplette” and read the litany of inexcusable gaffes for yourself.  But somehow the train that left the track of righteousness and reason keeps on rolling week after week, NFL season after NFL season.

The office of the commissioner is always quite eager to flex its muscles at the expense of the players and coaches, but what stand will Roger Goodell take to manage its own employees?  Anything short of firing Triplette will send a clear message to fans, teams, and the media that integrity is not a goal of the NFL, but a term of convenience invoked only when it’s easy.

If the media, who are controlled by the NFL about as closely as any professional league, has no choice but to claim a call is blatantly wrong and calls for the job of a referee, the time to act has long passed.

Should the NFL allow this chowderhead to continue his career as a chaos producing dunce, the next misstep could cost a win, season, and championship.

It’s easy to look at the 42-28 final score of the Colts vs. Bengals and make the determination that as bad as Triplette’s calls were, they didn’t cost the Colts the game, but who’s to say?

As if the reversal of the call wasn’t bad enough, this dunderhead’s explanation to the pool reporter who spoke with Triplette after the game is even worse: