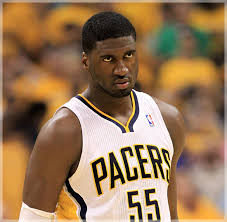 What is Roy Hibbert willing to do to win? That is the question that must be answered before coach Frank Vogel decides whiter to start Roy Hibbert in Game Two.

The Indiana Pacers lost the first game of the best of seven series 101-93 against the mostly mediocre Atlanta Hawks, and many in Indianapolis are sweating that they lost the series with it.

For weeks, fans and media have been leaping from the Pacers bandwagon like new commissioner Adam Silver planted an easily discovered explosive to its underside before loping away from it with his oddly giant strides.

I am not so easily swayed, but with every game I have found myself feeling lonelier and dumber for continue to espouse faith in this formerly competitive bunch.  The first two minutes of the game were sweet for the home crowd, but sadly NBA games are mandated to last an additional 46 minutes.

The rest of the first half wasn’t horrible, ending in a 50-50 tie, but the second half was a stage four pathetic mess that very quickly sucked every bit of hope from the Bankers Life Fieldhouse crowd.

Jeff Teague (15 points) Paul Millsap (13 points) combined to score 28 of the 30 points the Hawks scored to shut the door on the Blue and Gold, but this is only one of the four needed wins to end the Pacers season.  Teague, Millsap, and Kyle Korver are going to need three more wins to send the Pacers into the long, lonely, dark, and cold night of the offseason.

The game was won at the foul line, as the Hawks drew 29 fouls leading to 24 made free throws.  The Pacers were fouled 20 times for 16 points from the line.  That sets up a little math even I can understand – 24-16=8 – the exact point differential in the game.  The Pacers tend to fall in love with jump shooting, and smart basketball players don’t foul jump shooters.

All the Pacers lost last night was the opportunity to sweep the Hawks, and no one thought that was going to happen anyway.  The most enthusiastic optimists saw the Pacers moving ahead in five.  Just because the Pacers lost game one instead of game three nothing has changed.

Now if Frank Vogel can’t get the Pacers over the hump in game two, the landscape changes a little bit, even for me – a guy who is still firmly convinced his belief that the Pacers will earn their way into the NBA Finals.

Why I remain so convinced that the Pacers will recapture the magic the led them to an NBA best 33-7 record after the first 40 games of the season is a good question without a statistical answer.

Roy Hibbert continued to author the sad story of his own demise.  After a sweet left-handed hook early in the game, Roy abandoned aggressiveness until the result of the game was no longer in doubt.  He finished with eight points and eight rebounds, but a +/- of -11.

Whether the Pacers sink or swim against the Hawks will not be determined by statistics but their desire to play hard, play together, and do the little things that provide additional possessions.  Are the Pacers willing to do those things that serve as points of differentiation?  If they are, and I believe the switch will flip to get them over this supposedly insurmountable hump, they are good enough to win until the Finals.  If not, they will enjoy a few bonus weeks of soul searching.

Winning a championship is a lot like the scene in “The Untouchables” written by the great David Mamet where Sean Connery asks Kevin Costner what he is prepared to do to catch Al Capone.

Do the Pacers have the stones, the sack, the gall, and the grit to do what is needed to end the season of a game but mediocre Hawks team?  I believe they do and will.  The next chapter in the saga of this strange season comes Tuesday night.   What are the Pacers prepared to do?

One thought on “Indiana Pacers – Logic says the Pacers are in big trouble; Good thing logic has nothing to do with sports”