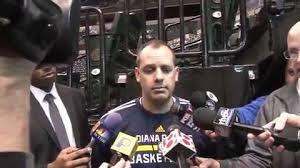 Frank Vogel isn’tenjoying interactions with media as much as he used to.

It seems like a lifetime ago that the Indiana Pacers were NBA media darlings rolling to 16-1, 33-7, and 46-13 records.  Paul George on Jimmy Kimmel, Stephen A. Smith talking to the starting five plus Frank Vogel, and magazine covers extolling the team-first lovefest gave the Pacers the kind of adulation that resulted in routine sellouts at Bankers Life Fieldhouse.

Since March 2, the Pacers are 10-13, and are being lambasted by the same media and media that pledged so generously their love just weeks ago.  Two things compel media consumption – the climb up the mountain and the tumble back down.  Rarely do both happen in such a compressed period of time, and still the opportunity exists for the Pacers to find redemption with 12 wins prior to collecting four losses at the wrong time.

If the reclamation project doesn’t commence immediately with a win in tonight’s Game Two against the Atlanta Hawks, there are going to be consequences – very pragmatic consequences – for the players and coaches.

This is likely not lost on the Pacers players, and it sure as hell is not lost on the coaches.  Being a coach in professional or collegiate sports is a brutal career choice with looming disaster around every corner.  No NBA coach was safer in his position three months ago than Frank Vogel, and now people talk about his firing being a done deal should the Pacers not rally to beat the eight seeded Hawks.

Lance Stephenson’s free agency leverage would be significantly improved by a trip to the NBA Finals.  As the Pacers have shown poor offensive movement, Stephenson has started shooting rather than facilitating.  His 18 shots in Game One were likely more an effort to help the team rather than pad stats, but as one of the lowest paid Pacers, Stephenson is looking for a significant raise that will be reduced should his team suffer a first round crap out.

For the first six years of his NBA career, Roy Hibbert has been an enthusiastic fan favorite.  His performance during the 2013 playoffs was a primary cause of the Pacers run to the Eastern Conference Finals.  Averaging 17 and 10 through the 19-game postseason established Hibbert as one of the best true centers in the league, and his selection to represent the East in this season’s all-star game was supposed to be the first of many honors.

Now, Hibbert is the poster boy for all that has gone wrong.  His post-game comment about “some selfish dudes” in the Pacers locker room was ironically seen as the most selfish public act by anyone on the team.  His image in Indianapolis might have been corrupted forever should the Pacers lose tonight and blow the series to the 38-44 Hawks.

There is a lot on the line tonight despite the guaranteed contracts for the players.  The relentless march in a positive direction by a franchise deliberately rebuilt over a long period of time after the brawl in Detroit and significant behavioral missteps by players who played by their own rules will come to a screeching halt.

And what about Larry Bird’s role in all of this?  The Danny Granger trade, the signing of Andrew Bynum, the signings of C.J. Watson and Chris Copeland, and the Gerald Green/Miles Plumlee for Luis Scola will have come into question.  All seemed very smart at the time, but the proof is in the pudding for the ticket buying public.

For me, I still think this team is in temporary turmoil, and will find a way from the darkness into the light.  The Pacers will win tonight, win the series, and then beat the winner of the Wizards vs. Bulls series.  If the Heat make it to the Eastern Conference Finals, the Pacers will beat them too, and all this will be forgotten.

The consequences of losing are just too severe to allow the Pacers the option of malaise-ball tonight.  Vogel is coaching for his career, and he’ll find a way to put five players on the floor ready to compete.