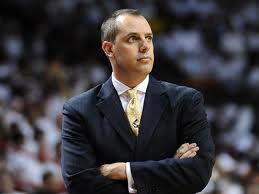 Not sure by what measure Frank Vogel has not been an effective leader for the Indiana Pacers.

Either ESPN is creating a story out of whole cloth or Indiana Pacers management is clinically insane.  Firing Frank Vogel, a coach that has giving his team a better and better chance to win over the course of four seasons would be madness.

There is no denying that the Pacers suffered a virtual collapse after the 59th game of the season with the team boasting a gaudy 46-13 record.  Finishing 10-13 gave fans cause for worry, and the bad home loss to open the playoffs against the Atlanta Hawks brought panic.

Pacers president Larry Bird is well known for a lot of things, but panic is not among them.  Owner Herb Simon is about the furthest thing from a activist as there is in sports.

The Pacers players were unanimous in their support of Vogel after yesterday’s practice, and David West rolled his eyes with incredulity when asked.

Here are the numbers on Vogels 3+ year tenure as coach:

For that, a coach is fired?

The Pacers under Vogel have won consecutive Central Division titles for the second time in franchise history, and the Pacers SRS (simple rating system) score has improved every year he’s run the team.  He is  the second coach in the Pacers NBA history to lead the team to three straight seasons winning more than 60% of its games.  The other was Bird from 1998-2000.

Anyone who was in Indianapolis during Bird’s days as coach remembers that when he left after taking the team to the NBA Finals, he explained that players tend to tune out a coach after the third season.  This being Vogel’s third season, maybe Larry Legend sees the second half collapse as evidence that the Pacers could use a new voice of leadership.

The Chicago Bulls are down 0-2 to the Washington Wizards after two games at the United Center, and no one in his right mind questions Tom Thibodeau’s leadership.  The San Antonio Spurs are an even 1-1 after losing last night to the Dallas Mavericks, and lost the Dallas Mavericks – the eight seed – 4-1 in the first round in 2011.  Gregg Popovich’s job is safe.

Neither situation is an apples to apples comparison as the Bulls lost Derrick Rose to injury and team leader Luol Deng was traded.  The Mavericks 49-33 record would slot them as the third seed in the East.  The Hawks finished 11 games in front of the Hawks.

And if Vogel is coaching for his job, why are Larry Bird, general manager Kevin Pritchard, and special assistant Donnie Walsh not accountable for signing Andrew Bynum and trading Danny Granger for Evan Turner and Lavoy Allen?

Click here to finally get your teeth fixed by the best – Dr. Mike O’Neil of Today’s Dentistry

Citing Granger as a team leader and mentor for Paul George was always inaccurate, but whether or not the signing and trade did any harm, the moves sure didn’t seem to do much good.

Vogel might be a nice guy in the right place at the right time, or he might be a very adept leader who understands consistent and positive management is the best way to extract the best effort and play out of his players.

The proof is in the pudding for Vogel.  The team has achieved better and better results from season to season, and not attributing some of the credit to Vogel is ridiculous.

Should the Pacers fail to win this series against the Hawks, there will be some tough decisions to make, but continuing to keep Vogel as the coach isn’t a tough call at all.  It’s the only call.

This story has sounded like a news outlet trying to create controversy from the beginning, and I’m not buying it.  It doesn’t sound like the kind of thing Bird would leak, and he’s the decision maker unless Simon decides to channel Knicks owner James Dolan.