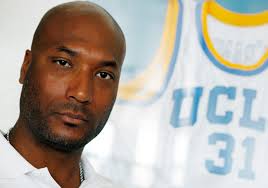 Ed O’Bannon will finally have his day in court beginning tomorrow.

For the majority of college athletes, the NCAA does its job quite nicely.  Athletes earn degrees and learn the incredibly important lessons that the adversity of competing provides.  The school gets notoriety, a marketing platform, and a campus esprit de corps.  Players get education.  Nice.

But rules aren’t written to provide cover for the majority – it’s the exceptions that warrant attention and legislative remedies.

Most people in our society would never think to steal from one another.  They are imbued with a morality that makes a law punishing thieves an unnecessary contrivance.  Sadly, there are those who covet and grab.  A legal consequence for theft is necessary because of them.  Most would never consider physically harming another human being, but for the very few that do, we build and fill jails.

The NCAA is being battered in court, media, and the legislature for a series of simple-to-understand concepts that fly in the face of reason.  Kentucky basketball coach John Calipari is going to average $7.5 million in earnings of the next seven years.  Alabama football coach Nick Saban is going to make $6.9 million.  Duke coach Mike Krzyzewski clears nearly $10 million when thresholds for bonuses are met.  Players, regardless of position or importance, are paid nothing.

Athletes do receive an education, if they are able and willing to use it.  Some wring the absolute most out of that opportunity, while others show up on campus incapable of competing in the classroom as they do on the field or hardwood.  North Carolina guard Rashad McCants won his coach and school an NCAA Championship in 2005 while also being listed on the university’s Dean’s List.  Sadly, he never attended a course or completed an assignment that semester.

Kentucky has earned a reputation as a preparatory service for the NBA – a de facto minor league franchise.  I spoke to a former Kentucky student who served as a tutor for one of the future one-and-done players that Calipari first brought to Lexington.  According to the tutor, the player made every effort to apply himself academically, but because of a challenging background and an inadequate high school education he was unable to utilize the education being offered.

That player, whom I won’t name because I don’t want to embarrass him, spent one year at Kentucky, tried for all he was worth, received zero educational compensation, and went to the NBA with nothing substantial to show for his eight or nine months in Kentucky.  Calipari continues to cash lotto size checks because of this player’s work, and those like him who continue to win at a high level.

The O’Bannon case focuses on the form athletes are forced to sign as a condition of their scholarship that allows schools to profit from his or her likeness.  O’Bannon feels that athletes should be allowed to market their likenesses as they deem reasonable.  Again, for 99+% of athletes, this is really not much of an issue.  No one buys an EA Sports game because of a second string offensive guard, and jersey sales for a virtually anonymous scout team member are nonexistent.

But for a guy like Johnny Manziel, his inability to capitalize on Texas A&M jerseys emblazoned with his now iconic #2 robbed him of a meaningful infusion of wealth.  The marketing value of Robert Griffin III’s Heisman Trophy win for Baylor was estimated by an internal university study at a quarter of a billion dollars.

At many schools, athletes are guided toward majors that are not rigorous so they can maintain eligibility.  They are allowed minimal latitude in choosing the quality of their education because coaches don’t want the potential pitfalls of education to corrupt what they are paid millions to provide – victories, championships, and checks for capital campaigns from smiling and proud alums.

The inequities of the business model in collegiate athletics that serve as well-publicized exceptions to the order the NCAA provides have grown more obvious as the money flowing to schools through media, merchandise, and ticket sales have multiplied exponentially.  Coaches’ salaries growing from a couple hundred grand to CEO-esque has made the inequity stark.

There are plenty of other suits and legislation pending that will forever alter the NCAA as we know it, and while the O’Bannon case has taken five years from file to trial, it won’t be half that long again for the economic face of college sports to be radically changed.