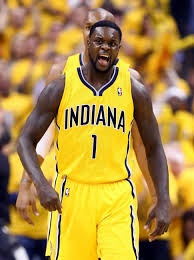 Lance Stephenson is a risk taker on the court, but he should make the safe play in free agency and re-sign with the Pacers.

Sometimes the stars align correctly for the right talent to blossom at the right time in the right place, and that is what has happened for Indiana Pacers shooting guard Lance Stephenson over the past four years.  If past is indeed prologue, Indianapolis is exactly where Stephenson should stay.

Stephenson was drafted by Larry Bird – a man who believed in his ability to mature and develop as a human being while finding an avenue to exploit his estemable basketball talents.  Some risks like this fail.  Lenny Cook and Lloyd Daniels stand out as New York high school legends whose demons and timing never allowed for a moment like that Stephenson is enjoying today.

Bird changed the game for Stephenson, and that level of faith requires an acknowledgement – not because a good act deserves reciprocation, but because that level of trust is damn hard to find.

Moving on to the highest bidder is almost always a mistake, regardless of the profession.  Making decisions based on cash and only cash leads to disappointment.  Doing what you love with whom you love in a place you love will result in the greatest likelihood for success, and at the age of 23, Stephenson hasn’t quite figured that out yet.

If he had, the ink on his contract would already be dry.

It’s fun to be courted, and while Stephenson was earning pennies over $1 million per year, the teammates who reportedly dislike him and wish him gone were bringing in more than that each month.  Because of that, Stephenson can’t be blamed for indulging in meetings with the Chicago Bulls, Los Angeles Lakers, and Charlotte Hornets.

But in the end, Indiana is the place that tolerates his quirks, and loves him for who he is – warts and all.

Stephenson’s personality works here.  His ascension as a player has paced in lockstep with the Pacers return to prominence, and fans embrace him as one of the principle reasons for it.  That has earned Stephenson some equity that will have to be rebuilt from the ground floor at his next stop, and that process can be exceptionally bumpy.

What comes next for Stephenson will determine the terms of his following contract, and that’s where he is going to make the money that will last him – and his family – several lifetimes.  There is no situation more fertile for the 23 year-old Stephenson of comparatively meager means to become a 28 year-old superstar set for life if he lives to be 620.

This decision is not about loyalty to the man and franchise who took a chance on him when no one else dared to.  It’s about the pragmatics of continuing to exploit that trust to build a career that will last far beyond the five years/$44 million offer that has been made.

Click here to finally get your teeth fixed by a great dentist – D. Mike O’Neil at Today’s Dentistry

Stephenson’s focus needs to stray from the instant gratification of the millions that the Bulls, Lakers, or Hornets might offer for the next four years, and hone in on the best environment for continuing to blossom as a talent.

If Stephenson can find a place that will dedicate the same resources and significant patience to his development that the Pacers have, he should head there without regret.  Ignoring the proof that lies in the Blue and Gold pudding in Indianapolis for a few bucks would be the kind of short-term wisdom that lands a significant percentage of NBA players in the poor house shortly after retirement.

Indiana is the safe choice, and at the age of 23, the safe choice is almost always the right choice.  Stephenson should take the $44 million, and then go for the bonanza in five years when his talents are at their zenith.

2 thoughts on “Lance Stephenson has succeeded in Indiana, and that is why he should sign with Indiana Pacers”