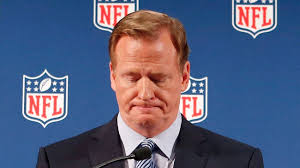 Yesterday was a sad day for the NFL, but sadder days are ahead. We just won’t find it as easy to blame Roger Goodell for them.

Only one thing could cause significant erosion of support among NFL owners for Roger Goodell to remain in his role as commissioner of the NFL, and that is an attack on their wallets.

Goodell could have twerked and farted at the podium during yesterday’s ineffective press conference, and still the owners would praise their fair-haired boy because Goodell is taking all the slings and arrows from the players, media, and public that would otherwise be headed toward them.

That was the point of the player conduct policy enacted in 2007 – take the discipline out of the purview of the teams and owners.  Let Goodell take the heat.

The only thing a billionaire (and all 32 of the NFL franchise owners are billionaires) avoids with more passion than being the bad guy is becoming a lowly millionaire.  They hire bad guys – hatchet men – to handle the unpleasant stuff.

For those who watch the excellent “Ray Donovan” on Showtime, Ezra pays Ray really well to handle the unsavory aspects of his business.  While Goodell doesn’t run around beating the hell out of people like Donovan does, he does handle all of the ugly stuff that owners loathe.

Why Goodell thought a press conference was necessary is an interesting question given that he only dug himself deeper with platitudes and hollow apologies – maybe the only good question that wasn’t asked by the journalists who held Goodell accountable for his absurd self-absolution.  He did and said nothing yesterday that would prompt a reasonable person to trust him or the cash cow league.

I’m certain Goodell’s statement was vetted, and maybe even written, by multiple lapdogs in the NFL offices, but no one had the stones to tell him that admitting culpability without accepting a penalty would immediately by assessed by those with a functioning brain as hypocritical.

The guy who takes such glee in suspending and fining players is now viewed as someone unwilling to hold himself accountable, and while that is an untenable longterm position, it seemingly has had no effect on the gate or ratings, and only Proctor & Gamble and Radisson have adjusted their sponsorship spending.

Unless that small trickle of corporate dissatisfaction becomes a torrent, Goodell will be the commissioner as long as he likes.

Judging from yesterday’s announcement that “nothing is off the table” as far as discipline and the methodology that will determine severity, it’s safe to assume that Goodell will champion the creation of a panel or board who will be trusted to evaluate indiscretions and issue penalties.  That’s called taking a page out of the playbook of the NFL owners, corporate America, and the federal government.

Creating layers between those in charge and those who accomplish through work instead of meeting insulates the powerful. The next time the NFL has a crisis similar to that caused by Ray Rice, Adrian Peterson, Ray McDonald, Greg Hardy, and Jonathan Dwyer, Goodell will have the cover provided by a group employed to keep him out of harm’s way.

He will be the guy pointing, instead of being pointed at.

Of course, that’s pathetic and weak, but when was the last time you saw strong leadership from a CEO, commissioner, or president?  The phrase that pays in today’s America is “The buck stops there!”  Even that isn’t true.  The buck doesn’t know where the hell to stop because the infrastructure is purposely created and implemented to keep anyone from owning blame.

If there is anything to be admired about Goodell, it’s that he has resisted the temptation to bullet proof his office with the careers of underlings employed only to confuse those trying to get to the truth and hold those who do wrong accountable for their misdeeds.

Those days are quickly coming to an end.  What will remain after the NFL’s infrastructure is renovated, will be a confusing maze of men and women with fancy titles looking busy but doing little.

Goodell’s ineffective leadership will continue, but the days of people believing he’s the problem are going to come to an end, and that itself will become the bigger problem.