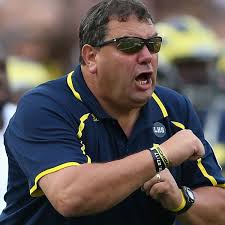 Ill-fitting sunglasses are the least of Brady Hoke’s problems this week as he fights for his job.

Michigan fans are sick and tired of losing.  Since firing Lloyd Carr for winning only 9.4 games per season from 1995 thru 2007, Michigan has posted a 43-38 record under Rich Rodriguez and Brady Hoke.

That’s an average of less than seven wins a season.

The frustration that accompanies that level of mediocrity at a school that believes it should contend for a Big Ten Championship every season, and win a national championship at least once per decade is about to claim another victim – or two.

Rodriguez was jettisoned after three mediocre seasons, despite making progress every year.  Before arriving in Ann Arbor, Rodriguez built a top ten team out of rubble in Morgantown, West Wirginia.  After being shown the door at Michigan, Rodriguez was hired at Arizona, where he has the Wildcats playing very solid football (4-0 this season).

Hoke took Ball State from MAC irrelevance to national prominence during his six years there, and repeated that feat at San Diego State in only two seasons.  Michigan hired Hoke, and the rest was supposed to be history.  This was Hoke’s dream job, and finally the spiritual successor to Bo Schembechler had been found.

A slide down the college bowl hierarchy from the Sugar to the Outback to the Buffalo Wild Wings in Hoke’s first three seasons had Wolverines fans on edge prior to the current season, so when Michigan lost last Saturday to Minnesota in Ann Arbor to run its record to a historically bad 2-3 mark, there was no doubt the levee was going to break – and it has broken.

On Monday, the sports staff of the Michigan Daily called for Hoke to be fired, and yesterday 7,000 students campaigned for the ouster of athletic director Dave Brandon.  A petition circulated by a student asking for Brandon to resign has more than 5,000 signatures of students and faculty.

The reason for the outrage is supposedly the treatment of quarterback Shane Morris following a hit that likely caused a mild concussion.

Oh, sure.  None of this indignation has anything to do with losing.  This is all about a fellow student with a headache.

Not to diminish the need for the care of athletes who suffer head trauma.  The effects of CTE are too profoundly troubling to be dismissed as part of the price of playing an occasionally barbaric game like football, but to think that 7,000 students amassed on campus with hand-painted signs yesterday because of concern for Morris is madness.

It is also crazy to believe that the reason for entrenched mediocrity in Ann Arbor is due to Rodriguez and Hoke.  Both have won elsewhere multiple times, and to assume that they forgot how to recruit and lead during their brief time in Ann Arbor denies the obvious – that the most talented athletes in America have no interest in playing at Michigan.

The days of Desmond Howard, Anthony Carter, Charles Woodson, and those very fast men like them choosing to matriculate in Ann Arbor are over.  Of the 23 current NFL players who attended Michigan, three are wide receivers (Jason Avant, Junior Hemingway, and Denard Robinson) and none are running backs.

Fourteen are either lineman or linebackers.

The time has come for Michigan boosters, alums, and students to realize that the evolution of the SEC into the dominant national brand in college football ended national relevance for the Wolverines football program, and an unholy amalgam of Jim Harbaugh, Les Miles, and Schembechler would be powerless to change it.

Do they think Harbaugh and Miles passed on the job because they are allergic to a fungus indigenous to Washtenaw County?  No, they are repelled by this particular challenge of leading Michigan’s vaunted football program because there is no solution.

Who is the best dentist in Indiana? Click here to find out!

The expectations for Michigan are far too high to be met, and because of that, coaches will be rotated every three-to-five years, and the mediocrity will become entrenched.

If Michigan had beaten Minnesota Saturday and had a 5-0 record going into this weekend’s game at Rutgers, fans would be lauding Shane Morris for his bravery in continuing to play and hiding his condition from Hoke.  Hoke would be viewed as a great leader who has instilled such passion in his players that they would do anything to continue playing for the maize and blue.

Such is life for coaches and fans.  Winning is a salve that cures all wounds (including concussions), and losing ends careers.

One thought on “Michigan Football – Brady Hoke might be fired, but it will be for losing game – not jeopardizing Shane Morris’s health”