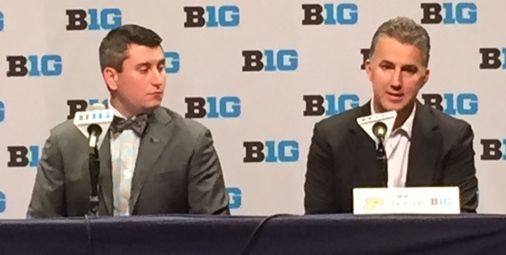 Purdue’s Matt Painter assesses his team’s hopes in the Big Ten for the 2014-2015 season.

College basketball coaches have a weird combination of hope, anguish, impending doom, and the weight of the world on their shoulders every October.  The odds are against them, their schedule sucks, players are refusing to learn at the preferred pace, and no one understands how difficult this season is going to be.

If you took them at their word, it would be clear that coaching 18-22 year olds to play basketball against other 18-22 young men is the most difficult challenge known to man.  Just making it to the end of the season after facing a minimum of 32 of these grueling battles of wits and braun is an accomplishment worthy of awe.

Winning regularly requires a magical combination of talent, adaptability, character, athleticism, and length.  Losing is no less remarkable because the hangover is so painful and lasting.

Some deal with it by using humor, and others seem permanently dour and bitter.  Becoming a coach at the Big Ten level requires endless hard work, good fortune and timing, and an ability to be endlessly fascinated by the intricacies of a game that was invented to help kids stay interested in fitness through gym class.

Some, like Nebraska’s Tim Miles, approach dealing the media with humor.  Others, like Michigan’s John Beilein, see spending a minute with the media as a wasteful chore that distracts from building his team.  In the middle are the other 12, most of whom understand just how tenuous their futures are.

A couple of losing seasons, and the magical lifestyle on entitlement that an enormous salary and fame provides will be ripped from underneath them.  One thing coaches are very aware of is how they got their jobs – usually because another coach either violated rules or lost a few too many games.  Tomorrow is not guaranteed in coaching, and families should expect to move – sometimes often.

The most important responsibility a coach faces if he wants to keep his job isn’t winning, following rules, or graduating players.  It’s defining expectations and driving a narrative that allows his team to comparatively succeed.  That work continued yesterday in Chicago at the Big Ten’s Media Day.

Thirteen coaches enthusiastically praised Wisconsin as the default choice to win the conference.  The 14th, Wisconsin’s Bo Ryan, refused to accept the applause from his peers.

If fans expect their favorite team to finish seventh, but comes in fourth, they have a party and the coach gets an extension.  If a team is picked first, and finish fourth. it’s goodbye Charlie!

Based upon the eight minute reports issued to the media yesterday from the dais at the Hyatt Regency O’Hare, it will be a miracle if any team survives the gauntlet of the 2014-2015 Big Ten season, much less wins the thing.  The biggest takeaways were that Illinois John Groce likes his team, and that Rutgers Eddie Jordan is looking forward to the season like a criminal looks forward to his arraignment.

No insurance, no problem! Click here to make the best dentist your dentist – Dr. Mike O’Neil of Today’s Dentistry

I like coaches.  They serve as leaders for a program and mentors for the athletes trusted to their care by parents who just want their sons and daughters to face a little harmless adversity and enjoy the opportunity to play a game they love to the best of their ability.

Most of them are a little off center, like inveterate gamblers who hate themselves for standing at the craps table or buying points for the Appalachian State vs. Troy game tomorrow.  They love and hate their jobs simultaneously.  The futility of coaching basketball is accepted, processed, and dismissed.  Complaints about travel, media, recruiting, parents, administrators, referees, and schedules are favorite topics of conversation.

Despite protestations to the contrary, there will be a winner this season in the Big Ten.  And there will be a coach who takes five minutes to celebrate it before he finds another challenge he needs to move heaven and earth to overcome.

So who is going to win the Big Ten?  Wisconsin.  Sorry, Bo.