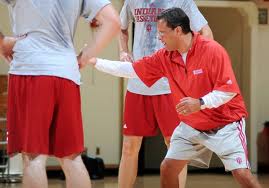 Results of the work being done in Bloomington were not revealed during last night’s exhibition win, but will be soon enough.

Everything at Assembly Hall is okay.  It’s not great.  It’s not awful.  It’s okay, and that should be what fans expect out the of the 2014-2015 Indiana Hoosiers.

After four individual events of serious misbehavior, the message has been sent that the next shoe to drop will kick a player onto a bus headed somewhere else.

With the two exhibitions now behind them, the Hoosiers are still trying to figure out what they do best.  Despite those two games, it’s still impossible to predict the level of success this team will enjoy.

Last night’s game against the University of Indianapolis was a tale of two stretches.  For the first 12 minutes and final 20 minutes, the Hoosiers looked lackluster.  During those two spans, Indiana was outscored by nine points by a Division II team.  For the final 7:37 of the first half, Indiana went on a 22-0 run that was impossible for the Greyhounds to overcome.

There are plenty of places where the Hoosiers need to show improvement, but the exhibitions are played with an eye toward exposing those areas.  Because of a lack of size, Indiana will have a tough time out rebounding anyone in the Big Ten.  As a result, they need to take good care of the basketball.

The ill-effects of turnovers will be magnified because of the additional possessions opponents will generate by dominating the glass, and the 18 giveaways by the Hoosiers last night were far too many to allow them to compete against top 50 teams.

When the Hoosiers shoot it well and take care of the ball, they will have a chance to compete against anyone.  If they are careless with the ball, and can’t cause mayhem for the opposing offense, they may look very mediocre – or worse.

Regardless of what happens from this point forward, taking the play of the Hoosiers in the exhibitions as a harbinger of future tidings is silly.  Even if Indiana had been unable to vanquish both Northwoods and Indy, those contests are for the coaches and players to experiment a little bit, not to hammer lesser teams.

Tom Crean was able to take a look at the Hoosiers playing a variety of defenses, and running a bunch of different offensive sets.  That intel will drive decision making for the games that count beginning a week from last night.

Making a prognosis about the value of individual players is useless.  What we found out about James Blackmon Jr., Robert Johnson, Yogi Ferrell, and Hanner Mosquera-Perea is what they look like competing against players who represent a lower tier of athleticism and ability.

This is a big year for Indiana and Crean.  Fans are antsy, wondering with ever increasing volume whether Crean is the right leader for IU.  I spent a considerable period of time during yesterday’s radio show on CBS Sports 1430 talking about a variety of areas where I have concerns – recruiting as a national program, overcommitments when scholarships are guaranteed (Indiana has two verbals for two scholarships that currently don’t exist), behavioral problems, wild swings of competitiveness from season to season and game to game, and recent comments that revealed a lack of understanding in how discipline works.

Indiana calls itself “The Crossroads of America,” and Indiana Basketball is at its own crossroads.  The plans to rebuild the culture of Indiana Basketball that seemed to be executed with such discipline from 2008-2011 have devolved into grab bag recruiting, and the result has been predictably uneven – both on and off the court.

Click here to treat your teeth to treatment from the best – Dr. Mike O’Neil at Today’s Dentistry

But the exhibitions are not the time to do any serious evaluation of this roster.  The energy of fans is much better invested in supporting the players who continue to work exceptionally hard to improve.  There is no point in pining for the future to come more quickly than it will.

This season will be what it will be.  Wins and losses will come in similar numbers, but with the Big Ten as wide open as it is, who knows what might happen in Bloomington?

All that is for sure is that basketball players better stay out of bars and cars after drinking.