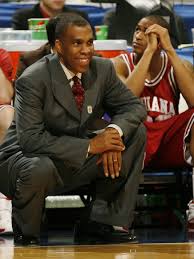 Mike Davis will be back in Assembly Hall tonight as his Texas Southern team plays his former employer.

When the Colts lost a game where – again – virtually everyone but safety Mike Adams failed to show up on the defensive side of the football, I decided it would be a lot more fun to write about the Indiana Hoosiers welcoming Mike Davis back to Assembly Hall than to regurgitate analysis of the Horseshoes latest debacle at the hands of a good NFL team.

The running game of the Colts was so inert that Andrew Luck scrambled for more than three times the yardage compiled by running backs Ahmad Bradshaw and Trent Richardson combined (15 for Luck, four for Bradshaw, and zero for Richardson).  Conversely, in three seasons as an employee of three NFL teams, the heretofore completely anonymous Jonas Gray carried the ball six times more than his career total for 199 yards and four TDs for the Patriots.

It’s just too depressing to think about, much less write about.  Plenty of time to talk about the Patriots dominance this afternoon on the radio show.  No point in putting myself (or you) through even more misery here.

Questioning the Colts ability to compete in the postseason presupposes they will qualify for the playoffs at all – not a sure deal at all with the Houston Texans only one game back in the AFC South.

Tonight, Mike Davis makes his first trip back to Assembly Hall in Bloomington since being asked to vacate the premises at the conclusion of the 2005-2006 season.  His record of 19-12 and a second round loss in the NCAA Tournament were too much for Indiana fans and athletic director Rich Greenspan to bear, I guess, in Davis’ sixth season.

Indiana fans would probably settle for 19-12 and a second round flame out this season.  It might be enough to prompt Indiana to offer current coach Tom Crean another contract extension.

Davis was unappreciated as the Hoosiers coach, and not entirely without reason.  He was everything Bob Knight was not – quiet, unassuming, and black, but also not exceptionally cognizant of what kind of basketball Indiana fans enjoyed watching.  After the Knight recruits graduated or left, it seemed Davis was more comfortable bringing in kids from his native Alabama natives as Hoosiers.

That wasn’t a great recipe for success or acceptance among fans.

Davis talked about changing the uniforms to feature player names on the backs, and getting rid of the red and white striped warm up pants altogether.  Regardless of the seeming meaninglessness of those two positions, it permanently etched Davis’s name among outsiders who just don’t get what Indiana Basketball is all about.

Given his choice for a replacement, Hoosiers fans might have been thrilled to retain the anti-charismatic Davis.  Less than two years after Davis moved his family back to Alabama as he accepted the head coaching position at UAB, the Indiana program was in ruin as Kelvin Sampson brazenly rebuilt quickly with flawed parts gathered from nefarious suppliers.

Click here for the best dental care in Indiana from a Notre Dame and Indiana grad – Dr. Mike O’Neil from Today’s Dentistry

Since 2003 (Davis’s third season), Indiana has gone through an entire season unranked by the Associated Press seven times, and been ranked in the Top 25 at least once in five other seasons.  Prior to that, Indiana was ranked in every single season back to 1971 under the under appreciated Lou Watson the year before Knight came to Bloomington.

Davis was the answer to holding a fragile team together following the clumsy zero tolerance firing of Knight by then president Myles Brand, but he was unable to build a program that both suited his basketball dreams and the vision of the IU fans who demanded a specific essence from their team.

Fit is key for a person and a job, and the fit in Bloomington wasn’t snug between Davis and Indiana.  But when he comes back to Assembly Hall tonight, I hope the reception is warm.  Recognizing the good for which Davis was responsible is the bare minimum Hoosiers fans own their former coach.

Over the last 22 seasons, Indiana has been a participant in exactly one Final Four (2002 in Atlanta).  Davis was the coach.  That alone is worth standing for ten seconds and applauding.