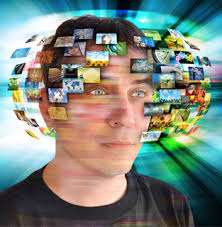 Sadly, a life like this is not a technological possibility.

How many channels can be DVRed at once?  The sheer tonnage of games are going to my system tonight and throughout the weekend.

The only time during the weekend when I won’t be multitasking by watching two or three games at once, or catching up on games that I record will be at the end – on Sunday night when Lex Luthor tries to render Andrew Luck ordinary again.  The Colts and Patriots I get to watch with total focus.

Until then, my eyes will be darting from TV to smart phone to tablet and back.  My retention level will likely be quite poor, but there is no expansion possible for my internal hard drive.

Human beings weren’t built to absorb the input from three separate complicated events simultaneously, but what choice do we have when the Pacers, Hoosiers, and IUPUI Jaguars all play at 7p.  Throw in the Ben Davis vs. Center Grove high school football game I’ll be watching and describing on WHMB TV-40, and steam will stream from my ears like Grampa on “The Munsters.”

It’s likely I will be up half the night watching games I missed, and then at noon Saturday it’s off to the races again.  A bit of a break early as Ohio State vs. Minnesota and South Carolina vs. Florida are the only two games I have an overriding interest in.  At 3:30p, life gets serious when Mississippi State and Alabama lock horns with a potential trip to the College Football Playoff is on the line.  Indiana visits Rutgers at the same time, and while only IU and Rutgers alums and the insane could give a damn about that game, I’m guilty on both counts.  Notre Dame hosts Northwestern, and while this is not too big a deal, I like to watch Notre Dame.

Saturday night, the mayhem continues with the Pacers visiting the Chicago Bulls and the brittle Derrick Rose, who came out this week as a freeloader interested in making it through meetings 20 years hence without residual soreness from a career of barely playing basketball.  I want a Pacers win against the Bulls bad enough to taste it.

At the same time, Michigan State will either be exceptionally exceptionally pissed off after losing to Ohio State last Saturday or still hungover as they travel to Maryland for a trap game from hell.  I like to watch Michigan State lose because East Lansing is a dump, and I can’t figure out why their football and basketball programs are light years ahead of Indiana and Purdue’s.  If I’m asleep by 3 a.m., it will be a victory.

After so much input, my brain might freeze in a psychotic mode where additional stimulation is demanded.  This has happened before.  When I was a kid staying at my grandmother’s, she would stay up all night doing crossword puzzles, and I would bounce off the walls exhausted because why go to bed?  Eventually, the crash comes.  Hope it isn’t light out, because Sunday is an even bigger day.

Every single game being played Sunday is of interest for me.  Usually, there are three or four clunkers, but not this week.  Can’t wait to see what the Bears do this week to prove their culture is built on quicksand.  And while the Rams hosting Peyton Manning and the Broncos appears to be a one-sided train wreck with the Rams exchanging one subpar backup quarterback for another, this is the kind of opponent they figure out a way to beat.

The Rams defense is crazy fast and talented, and Jeff Fisher is very familiar with Manning.  He’ll dig into his bag of tricks, and it wouldn’t surprise me if the Rams cover that +10.

Click here to finally go to a great dentist to get your teeth fixed – Dr. Mike O’Neil, Today’s Dentistry

On Monday, I get to purge all of what I’ve seen here on kentsterling.com, and the radio show.  And then Indiana welcomes home Mike Davis as the head coach of Texas Southern for their second cupcake regular season game.  Happily, Pittsburgh plays Tennessee on Monday Night Football, and who gives a damn about that mess.

In the meantime, some 20-year old dumbass is going to screw up and grab headlines.  We adults will wag our fingers because entitled and enabled dumbness frustrate us.  Maybe an NFL stud will knock his wife unconscious or hit his kid with parts of a tree, and the cycle will begin all over again.

Loving sports has its price.