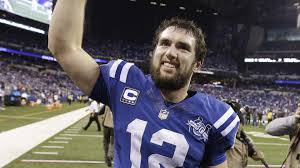 Andrew Luck was a smiles yesterday as the Colts coasted through a nice second half to beat the Jacksonville Jaguars 23-3.

People took to Twitter early in the second half of what would become a blowout win for the Indianapolis Colts to taunt for predicting an easy win for the Horseshoes on my radio show (weekdays 3p-6p – CBS Sports 1430).  They blamed me for jinxing the thing by being so confident in the Colts ability to beat an unworthy opponent.

The Colts led only 6-3 after the first half, and I wondered too whether my bold predictions had put a whammy on Andrew Luck and the boys.

If there was a whammy, it was shed after those first 30 minutes of football at Lucas Oil Stadium.  Luck and the offense got untracked, and the defense was mostly stout as they rolled to a 23-3 win against the worst team in the NFL, and given the overall suckitude of the Oakland Raiders and Tennessee Titans, that’s quite an accomplishment.

Luck was pedestrian by his standards (or our standards for him), completing 21 of 32 passes for 253 yards and one touchdown.  He ran eight times for 49 yards to keep the chains moving when the Jags dropped seven or eight into coverage.  Blake Bortles was brutal to the point fans in Jacksonville are likely asking whether the #3 overall selection in the 2014 NFL Draft was a complete waste.  Where Luck developed and showed his pedigree as a rookie in 2012, Bortles has shown the traits that made experts question the sanity of the Jags brass in investing that pick in Bortles.  He was 15 of 27 for 146 yard and a pick.  His QBR was a dismal 2.3.

The Colts get to host the 3-8 Redskins led by the talented but wayward Robert Griffin III next Sunday for a chance to nudge their record to 8-4, and perhaps build a three-game bulge in the AFC South with just four games to play.

Indiana University shot the ball very well Saturday night (over 50% from the field and 45% from beyond the arc), but still led a terrible Lamar team by only seven with under four minutes to play.  The Hoosiers won by 13, but the defense was shaky at best.

Tonight, the Hoosiers host Eastern Washington in Assembly Hall as they try to run their record to 5-0.  James Blackmon Jr. has been the consistent offensive force for Indiana thus far in the season, scoring 25, 19, 26, and 21 points in the first four games of his college career.

At some point, opposing coaches are going to take away Balckmon and force someone else to beat them, but until that happens, Indiana should be able to avoid an unsightly loss to a bad team.  EWU is not awful, oddly sharing two opponents in the early going with the Hoosiers.

With nothing to otherwise occupy my time Saturday afternoon (watching what I erroneously believed would be a Hoosiers football slaughter by the Ohio State Buckeyes was too depressing to contemplate), I rolled down to the Indiana State Fairgrounds to watch an in-state battle for second tier supremacy between IUPUI and Ball State.  The immensely entertaining game went to overtime, and was decided by a buzzer beater by Jaguars guard P.J. Boutte.

Click Here for a $1 dental exam by the best dentist in Indiana – Dr. Mike O’Neil of Today’s Dentistry

Both rosters were filled with Indiana kids, and each sported some very nice looking freshman.  Jeremy Tyler and Sean Sellers were outstanding for the Cardinals, and Aaron Brennan will be cornerstones for both programs for the next four years.

Lots of good basketball around central Indiana for your perusal over the next few months.  Butler is better, and this afternoon (2:30p), Purdue will play its first game in the Maui Invitational against Kansas State.  Tonight, not only do we have the Hoosiers, but Cathedral and Guerin will scrimmage tonight at 6:30p at Guerin High School.

So many games, so little time.