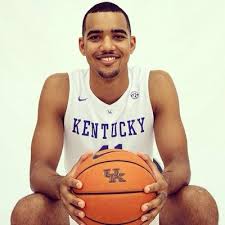 At most programs, Trey Lyles of Tech High School would be a star. At Kentucky, he is just another cog in a tremendous machine.

There was no chance – none – that Montana State would be able to compete with Kentucky, much less beat them.

After destroying #5 Kansas 72-40, holding the once proud Jayhawks to three second half field goals and a measly four assists for the entire game, Montana State was only going to test the Wildcats ability to avoid boredom for 40 minutes.

Having built a 39-11 lead through a solid first half, Kentucky decided to make the trip for the hapless Bobcats even more miserable in the Cawood Ledford Classic.

Kentucky held Montana State scoreless through the first 10 minutes of the second half to open a ludicrous 65-11 lead.  In games between mismatched fifth grade teams, occasionally you see a wacky one-sided score like 65-11.  I’ve never heard of a college game between teams with players on scholarship with a score of 65-11.

There will be those that scream about Kentucky showing a lack of class in running up the score and humiliating their guests.  I’m not one of them.

It would have been generous and decent of coach John Calipari to play some of the end of the bench guys who do the dirty work in practice without much reward for more than five minutes, but that’s a small quibble to be made by parents of Sam Malone, Tod Lanter, Brian Long, and EJ Floreal.

If I’m Calipari, my goal is to get everyone who can help Kentucky fulfill the promise of an undefeated season get a good workout in, and without a player on the floor for more than 20 minutes, he was barely able to get that done.

While I’ve never been a fan of Calipari for a variety of what I consider to be very good reasons, the excellence of this Kentucky team is impossible to ignore.  They are not only the best team in America, Kentucky might be the best team in the history of college basketball.

The only team that can beat Kentucky is Kentucky.  Apathy is the only enemy that requires serious attention from the Wildcats.

It’s entirely possible that ten players from this team will play in the NBA, and in an era when defense isn’t always a priority among even good college basketball players, this group suffocates opponents.

Kentucky has played a couple of bad halves of basketball (the 1st against Buffalo and Boston Universities), so they haven’t been perfect, but when focused as they were against Kansas and Montana State, they are as good as a team has ever been.   The defense held both to under 20% shooting from the field.

My advice for fans who love to hate Kentucky is to enjoy watching the players whole continuing to indulge in a loathing for Calipari’s self-important behavior and methodology in gathering McDonald’s All-Americans.

It’s not likely we will see a basketball team capable of reaching this level of play again in our lifetime.