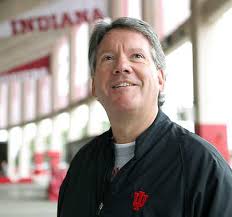 Brighter days are ahead for Indiana Basketball, I think, and Fred Glass is going to be a part of that solution very soon – one way or another.

Some mistakes you never stop paying for.

In 2000, Bob Knight was fired by Indiana University for being a jerk.  There was all that nonsense about Kent Harvey greeting Knight by his last name, and Knight typically exploding, but it was the incredible tonnage of bizarre idiocy in and around Assembly Hall that caused then-IU president Myles Brand to initiate the double-secret probation that zero-tolerance represented.

Knight should have walked away from Bloomington as soon as the meeting announcing the zero-tolerance madness was a adjourned, but he didn’t and the inevitable result – one guaranteed by zero-tolerance – came within months.

Players threatened to walk out if a coach already on-staff wasn’t hired, and Mike Davis, a tee-shirt salesman a couple of years before was tabbed to follow the toughest act in the history of Indiana hoops.  Davis seemed lost, unsure of where he was, most of the time he was in Bloomington.  Like many coaches, Davis annoyed local high school coaches with his indifference to their players, and then baffled longtime Indiana fans by threatening to put names on the backs of the iconic IU jerseys.

His ill fit was obvious, but the trip in his second year to the NCAA Championship game bought enough equity to force fans and administrators to tolerate Davis for a total of six mostly uncomfortable years.  The basketball wasn’t terrible – Davis was fired after a trip to the NCAA Tournament – but the indifference represented by the puny crowd of 7,000 at Assembly Hall for the NIT opener the year before was impossible to overlook.

Rick Greenspan was the athletic director who fired Davis, and he was also trusted to lead the search for a new coach.  This hire brought an opportunity to right the wrong of the Knight firing – a chance for redemption – to set right the chain of events that would allow Indiana to return to its spot among the college basketball elite.  Greenspan isn’t the only person responsible for bringing Kelvin Sampson in as the next leader of the most important marketing arm of the university.  He had a helper.

Captain Velour was the nickname for Adam Herbert, the president who followed Brand when he assumed the leadership of the NCAA.  Herbert was an odd fellow who wore velour sweat suits to basketball games, and refused calls from the governor.  He was dispatched soon enough, but not before Sampson went rogue and broke the very same rules for which he was punished at Oklahoma before he took the IU gig.

We all remember the train wreck of his nearly two years as coach, and the result was one of the uglier stretches in the history of Indiana Basketball.

Dan Dakich restored accountability as the interim coach with some tickets out of town for those unable to adjust to a re-introduction of consequences for irresponsibility, and then Tom Crean was hired by Greenspan.

There was no succession plan implemented by Knight, Brand, or anyone else associated with Indiana University in 2000, and as a result the Hoosiers have suffered through mediocrity interrupted by equal doses of wretched and excellent basketball.

The fan base has been splintered into factions that are equally disenchanted with the status quo, but unsure where the program should head next, and yet another that believes Crean may in fact be the leader IU needs to rescue its standing among college basketball’s elite.

Only one thing is agreed upon – last year’s 7-11 in the Big Ten followed by this year’s 9-9 is unacceptable.  A roster without a senior or NBA ready player (at least as determined by those who assemble mock drafts) has left many fans with a feeling of hopelessness, and hopelessness brings indifference – the least desirable fan temperament for university administrators.

With the end of every season comes a period of evaluation, and the possibility of a scenario exists where a wrong in Bloomington can finally be righted.  I’m not saying that a Knight disciple needs to be hired to lead the Hoosiers and erase the memory of 15 mostly lost seasons, but that a leader worthy of Indiana’s supposed status as a top five or top ten program can be tabbed to restore the strong culture of winning the right way that made Knight’s lunacy worth tolerating.

Maybe Crean suffers from many believing that he represents fruit of a poisoned tree.  Maybe his salesmanship rubs people the wrong way.  Hell, maybe he’s the right guy to lead a new generation of Hoosiers.  But there needs to come a reckoning of fans that this is Indiana Basketball, and to finally move forward to enjoy the players and their results.

Whether that means Crean is the longterm solution or athletic director Fred Glass is able to woo a candidate to Bloomington who can unite all factions of the fans like Michigan did in luring Jim Harbaugh to Ann Arbor or not, something needs to be done because using the word “toxic” to describe the situation in Bloomington has become tedious.

20 thoughts on “Indiana Basketball – It’s time to right the wrong done 15 years ago, that doesn’t mean bringing back Bob Knight”