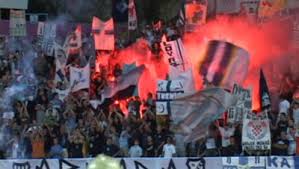 This angry mob of Indiana fans can stand down – Brad Stevens is not going to Austin as Rick Barnes’ replacement.

When I read his tweet, so many thoughts raced through my mind a pen and paper weren’t able to contain them.  The first was that Hoosier Nation’s collective head would explode if that happened, and black bunting would be hung from the top of Assembly Hall before Stevens got off the plane in Austin.

If rumors of that hiring became reality, Indiana Basketball zealots would begin to quickly cycle through the four stages of grief.  Denial comes first, and would simply involve them dropping to their candy stripe covered knees while crying “No, NO! Brad, noooooo!”  This would pass quickly and be followed by the second stage – depression.

Stone faced Hoosiers with red and puffy eyes would wander into Big Red Liquors for a fifth of Fireball and a case of Hamm’s.  No Hamm’s?  Then Wisconsin’s Best.  No Wisconsin’s Best?  Natty Light will do.

A few gulps in, the depression would quickly turn to anger.  Torches made by affixing useless but still inexplicably delivered copies of White and Yellow Pages to broom sticks would be lit.  A march on Assembly Hall would ensue, and athletic director Fred Glass would get a quick and ultimately harmless (Indiana fans are crazy, but not psychotic) glimpse of what it was like to be Nicolae Ceausescu as his reign in Romania was violently ended in 1989.

Then would come acceptance that Brad the Savior had chosen Texas over Indiana as his post-NBA destination.  Acceptance would look a whole lot more like a bunch of townies and students filled to the gills with cheap novelty whisky and speedily brewed $9/case beer forgetting why they were so agitated and deciding a piss and nap is a higher calling than yelling about Stevens flying over Bloomington to get to Austin.

Happily, the fact is that there is no way Stevens will go to Texas.  Reports from Austin are that a new coach will not be paid more than $3-million to lead the Longhorns during the winters that follow football season.  Stevens will not take a pay cut from his current six-year, $22 million deal given to him when he agreed to leave Butler.

Stevens is widely acknowledged as one of the best young coaches in the NBA.  During a Celtics rebuilding project that is now in year two, leading a roster of unknowns, Stevens has the Celtics on the brink of a playoff berth.  To lead Avery Bradley, Evan Turner, Marcus Smart, Jared Sulligner, Gerald Wallace, and Tyler Zeller to the postseason would be the single most incredible feat in the history of coaching, regardless of the sport or level.

He would leave that for a pay cut at a school where passion runs lukewarm for basketball compared to football?  Not a chance.

If Stevens is going to leave Boston for anywhere, logic would tell us it would be for Indiana, but only if Glass was given access to Calipari-esque money ($7.5M per year) to try to entice him to the place where his dad brought him to watch Bob Knight led teams excel – the place he dreamed of playing while becoming Zionsville High School’s all-time leading scorer.

Hard to imagine Stevens coming back to the college game anywhere with its recruiting, academics, compliance, and still maturing youngsters, but absolutely impossible to see him heading to Austin.

Tom Crean’s job is likely safe for another year as there isn’t an obvious Stevens-like candidate waiting in the wings to swoop in and rescue the Hoosiers from the mediocrity in which it is currently entrenched.

For those who want to watch Stevens coach, they will have to settle for Fox Sports Indiana’s coverage tonight as the Celtics host the Pacers.

Not only is Crean apparently safe, those arcane relics from an era when we let our fingers do the walking are too.