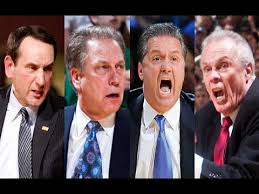 The road to this Final Four was paved in one of two ways.  Kentucky coach John Calipari has developed a system to acquire as much talent as possible, enacting it immediately upon arrival in Lexington, while the other three either built or continued a culture of excellence that regenerates each year.

Indiana is obviously trying to embrace the second of those two options as athletic director Fred Glass hopes momentum builds toward self-sustaining success as Tom Crean graduates classes who remain plugged into the IU program.

Michigan State’s Tom Izzo will coach in his seventh Spartan team in a Final Four this weekend.  For 20 years, he’s run the show after serving as an assistant under Judd Heathcote – who led Michigan State to an NCAA Championship in 1979 and retired in 1995.

Izzo inherited a culture that he quickly evolved to reflect his own personality without disrupting what Heathcote built.  Through the years, Izzo has built a family of tight-knit alums, including Magic Johnston – the charismatic star of the 1979 team – who hold current players accountable for their actions on and off the court.

From Jamie Feick to Mateen Cleaves to Chris Hill to Alan Anderson to Drew Neitzel to Kalin Lucas to Draymond Green to Keith Appling to Gary Harris to the current team, the lineage of the Spartan way has been passed.

It has resulted in consistent excellence and occasional greatness.

Duke took a different route by choosing to go outside the program in the spring of 1980 when it hired a 33-year old who had played and coached at Army to lead the Blue Devil program to prominence.  Whether the people who chose Coach K to run things at Cameron Indoor were prescient or lucky depends upon to whom you talk, but the patience shown through the first three seasons of mediocrity (a record of 38-47 and zero trips to the NCAA Tournament) sure paid off.

Since then, the Dukies are 905-204 with 31 trips to the tourney, four championships, 12 Final Fours, and an overall tournament record of 86-26.  Eighteen former Duke players are on current NBA rosters, and 44 others have retired after NBA careers.  The names are a who’s who of basketball, and they take tremendous pride in their ties to Blue Devil basketball.

When Wisconsin needed to replace Dick Bennett in 2001, it kept the hire in the university family as it tends to.  The coach at UW-Milwaukee had excelled at UW-Plattville for 15 years before the promotion to Milwaukee, and had been pretty good there too, so Bo Ryan had finally earned his shot at leading the Badgers.

For 14 years, Ryan has led Wisconsin to relentless positive results, never finishing outside the top four in the Big Ten standings and always having its ticket punched for a trip to the NCAA Tournament.  The last two years have provided the trips to the Final Four his resume’ lacked.  Penney, Harris, Leuer, Hughes, Stiemsma, Brust, and dozens of others led the Badgers under Ryan to maximize their potential and pass on the secrets of Ryan’s swing offense to younger players who yearned to understand.

Starting over is a loathsome and risky process.  To say goodbye to Crean is to say a prayer that the next hire will be the coach where the road to consistent success can begin.  There is also the option of dipping back into the Bob Knight coaching tree to build a bridge spanning 15 years from the Knight era to current day, which would ask fans to wipe the previous generation of Indiana Basketball from its collective memory or dismiss it as a foul dream sporadically interrupted by two sunny seasons of mirth and hope.

There is only one Calipari so hiring to a culture of future pros who cycle through every year or two would be difficult.

That leaves Glass with a hell of a decision – hope that Crean can find his way to success next year or risk bring fans into a malaise from which they may never emerge, or trust his instincts to bring in the next great architect of a once exemplary program that can pass the rock from generation to generation, leading the Hoosiers back to the kind of relentless success enjoyed by the four programs vying for the title this weekend.

That’s why they pay Fred the big bucks.