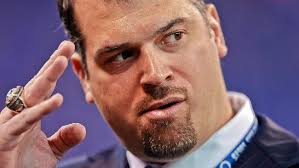 Colts GM was either really smart, really dumb, or somewhere in between over the weekend. Time will tell.

Minus historically great or terrible drafts, it takes years to figure out exactly how good or bad a pro football draft is, but the Colts look to have spackled a couple of holes and welcomed a game changer to a team hoping to win another Vince Lombardi Trophy.

The Colts addressed some needs late in the draft, and invested heavily in defense after grabbing burner WR/returner Phillip Wheeler in the first round.

There are still rumbles from critics about the Colts investing a first round pick at a position where they were strong.  “They already have one T.Y. Hilton, why do the Colts need a second?” is a familiar comment.  The flip side is that if one T.Y. is good, two will be even more difficult to defend.  Go ahead and single cover one of them, and watch Andrew Luck tally yardage and TD totals that redefine NFL offensive explosiveness.

Henry Anderson, a defensive end from Stanford, was taken with the 93rd overall pick and experts were unanimous in their admiration for that pick.  Anderson is versatile, and has a mean streak.

The rest of the picks are guys who are mostly unknown to the average fan, and even experts are unsure at what level they will contribute immediately to the success of a team that wants to win Super Bowl L.

Unless a player explodes into massive productivity – like several members of the 2012 Colts draft class, or get hurt, it’s impossible to accurately assess exactly how productive a draft may have been until a few seasons pass, so calling the Colts draft class as either an A or an F is a matter of guess work.

Even the 2013 class with outside linebacker Bjoern Werner as its first rounder is a tough grade.  So far, Werner has not been very good through his first two seasons, but that’s not unusual for a pass rusher.  Rams fans thought Robert Quinn was a bust until year three when he exploded for 20 sacks in 2013.

No one is saying that Werner will be another Quinn in his third year – just that the third year is where a pass rusher sometimes shows his true value.

Anderson is the latest effort by the Colts to find someone who can both get to the quarterback and be a solid run stopper.  Being impatient with him won’t do you any good either.

It takes time to figure out who and what there players are, and instead of dealing in the process of projecting productivity – a futile exercise for most – evaluate Colts general manager Ryan Grigson based upon his willingness to do something to acquire players who can win a championship.

There are a lot of GMs who make noise about drafting the best player available, but get tight cheeks when the time comes to pull the trigger.  Grigson bolstered a position of serious strength when he made Dorsett his first pick (#29 overall).

After that, the Colts became conventional, but if Dorsett is as dynamic as a receiver a return man for the Colts as he looked on tape, the Colts are going to be a nightmare to defend for many years.

Grigson has shown himself to be unafraid of risk and judgement.  I like a leader whose cheeks stay nice and loose.

Future hall of famer and University of Miami alum Reggie Wayne leaves, and is replaced by another future hall of famer Andre Johnson and Dorsett – both from The U.  There aren’t many teams who are able to improve at a position of strength the year following the probable retirement of a legend.

The Colts got better over the weekend – possibly a lot better, maybe only a little better.  Time will tell – regardless of how good we think with are at figuring out whether Clayton Geathers will be the starting strong safety in 2015.