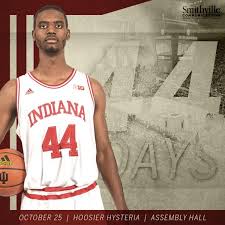 Jeremiah April is the latest transfer from Indiana.

As Indiana had again oversigned recruits for the incoming freshman class, it was clear that a few Hoosiers would need to either transfer or declare for the NBA Draft.  Jeremiah April seemed a logical choice, and he cooperated by announcing last week that he would jump ship.

After speculating that he might have been “Creaned” (a term used to describe a coach forcing a player from the program in order to recoup a scholarship needed for a player who might be able to help the team achieve an improved result the following season), I was told by someone who would know at Indiana that April chose to leave on his own.

While that’s better than Indiana coach Tom Crean shoving April out the door, the question of why April was recruited at all remains.

Last Spring, Indiana had three scholarships to give because of the transfers of Austin Etherington and Peter Jerkin, and Noah Vonleh declaring for the NBA, and the resulting search produced the 6’10” April and 6’9″ Tim Priller, along with graduate transfer Nick Zeisloft from Illinois State.

According to Rivals, Priller had one D-1 offer (from Illinois-Chicago) and April’s page shows none.  Nothing against either of these young men, but who on Indiana’s staff thought that either would contribute at a level expected of a big man at Indiana?

April’s highlight tape begins with two made free throws and is peppered with blocks against players sometimes a full head shorter, and Priller’s uses a won jump ball in the first :12.  Not exactly eye popping stuff.

I understand a coach who is fighting for his job refusing to allow scholarships to remain dormant throughout a season.  No one ever won a game because of a shorter bench.  As far as April and Priller deciding to accept Indiana’s offer, I can’t blame them.  If someone offered to overpay me by several times my value, I would take their money.

If Crean explained to both that their scholarships would be evaluated after their freshman year, I’m good with that too.  But if during this era when Indiana is guaranteeing scholarships for a full four years, they were brought to Bloomington only to be churned out the next Spring, that’s a miserable way to run a program or business.

April decided last week that he would leave, and Priller is still in Bloomington after logging 23 total minutes of game action to go along with April’s 17.  If April wasn’t pushed, that’s great, but how could anyone expect a kid with a ticking eligibility clock to respond to that level of non-use by staying put.

I hope Priller sticks it out.  He’s an enthusiastic kid, and remaining a Hoosier – if it’s in his control to do so – will pay professional dividends down the road.  And maybe it brings a level of consequence for Crean that his offer deserves.

When coaches and pundits grouse about the high percentage of transfers in men’s college basketball, they need to take into account the number of players who either opt out or are pushed out by coaches who make mistakes as they over sign and over offer a wide array of players so scholarships are all utilized.

It’s not the system’s fault that April was recruited at a level far above his capabilities, and if Priller goes, the same assessment applies.

There are a lot of reasons for players jumping programs, and quite a few begin and end with irresponsible and occasional duplicitous choices that are made by coaches.  If you want to reduce the number of transfers, penalize the players AND the coaches – not just the players.

As long as transfer rules are influenced heavily by the coaches who then exploit them for their own selfish purposes, it will be the student-athletes who bear the brunt of coaches irresponsibly extending offers that are impossible to resist.