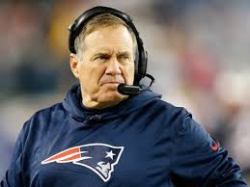 Bill Belichick is not named as a guilty party in the Wells Report, but given his past, does anyone believe he didn’t know balls were being deflated?

Don’t get me wrong.  I hate the New England Patriots – a miserable organization that values winning over all else, and that’s why the NFL is constantly uncovering rule violations used by Kraft/Belichick/Brady to gain an unfair advantage.

To very loosely paraphrase Dean Vernon Wormer in Animal House, “Believing that victory thru skullduggery equals valor is no way to go through life.”

The Wells investigation into Deflategate was conducted over more than 100 days and is chronicled in a more than 200-page report.  It’s findings are that the Patriots more likely than not caused the under inflation of game approved balls used by quarterback Tom Brady and the New England Patriots offense, and that Brady was likely generally aware of the deflation.

Consequences for breaking the rule that requires game balls to be inflated to between 12.5 and 13.5 pounds per square inch of pressure are to be announced in the coming days and may include fines, suspensions, and forfeiture of draft picks.

My preference would be for the Patriots to be given the very lightest punishment available by the NFL and the most massive possible by the Indianapolis Colts in the regular season game on Sunday Night Football October 18th followed by another ass-kicking in the playoffs.

The only meaningful disincentive for an organization that believes winning trumps all is a humiliating defeat administered by one of the teams they cheated against (does anyone believe this systemic and purposeful deflation of footballs was an isolated incident?).

Fines mean nothing to a guy with billions.  A two-million fine levied by commissioner Roger Goodell’s office would be a speeding ticket for Patriots owner Robert Kraft.  The loss of a draft choice?  The Patriots would figure out how to maximize whatever picks remained.  And the Patriots would consider it money and assets well spent in order to win another Lombardi Trophy.

Colts 55 – Patriot 3 would be a just result, but unfortunately the NFL can’t rig games to ensure the misery of coach Bill Belichick and his mercenaries.  Only the Colts can rise up to smite the evil-doers in a measure that would ruin a season or series of seasons for the Patriots.

Belichick is a current day version of Captain James T. Kirk of the Starship Enterprise.  remember in The Wrath of Khan how the story of Kirk beating the no-win scenario of the Kobayashi Maru was told with such relish?  Kirk reprogrammed the computer simulator so there actually was a way to win.  Star Fleet loved Kirk’s indifference to the rules in the same way Patriots fans love Belichick.

The NFL is without the muscle and will to bring a consequence severe enough to correct the Patriots zeal for sullied victory, but maybe the Colts can issue its own mandate for fair play every time they face these renegades.

That would be justice – the kind that would likely not correct the scofflaws, but force them to become even more brazen in bending, breaking, and masticating rules in order to gain the kind of small advantage deflating balls represents.

And before we dismiss the deflation of balls as some harmless fraternity prank, take a look at Warren Sharp’s analysis of what happened to the Patriots fumble rate after teams began maintaining and preparing their own balls for use on offense.

That level of turnover prevention is striking and shows that Deflategate may have given the Patriots a much more profound advantage than the NFL might believe.

The only worthy punishment for a renegade operation like the Patriots is losing, and the Colts may be the only team in the AFC capable of meting it out.

5 thoughts on “Deflategate – Patriots guilty, but should be punished by Colts – not NFL”